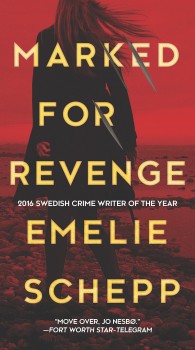 Public prosecutor Jana Berzelius needs to deal with the case of a Thai girl who died on a train while smuggling heroin capsules in her stomach, as well as trying to protect her own old identity. She fears that a notorious criminal Danilo will uncover her past.

The Norrköping police must deal with the case of a young Thai woman found dead in the toilet of the Copenhagen to Stockholm train. She died due to an accidental overdose while smuggling 50 capsules of heroin in her stomach, and some of them dissolved.
Her travelling companion Pim disappears from the scene and is quickly picked up by an unknown man responsible for the shipment from abroad. He doesn’t want Pim’s delivery to be wasted, too, and so holds her captive in an abandoned building by the water. Yet she manages to escape and ends up in hospital where she’s questioned by the police and indicates that a third girl was also used as a drug mule.
Enter Jana Berzelius, brilliant and enigmatic public prosecutor: physically strong, an MMA-trained fighter and a well-off successful professional following the rule of law. She’s tough, independent and conflicted. Jana has a difficult relationship with her adoptive parents, especially her father, prosecutor-general Karl Berzelius who openly hates her, and whose straight-as-an-arrow career path has been extraordinarily fortunate.
Jana is a former child soldier unable to deal with her past because of repressed memories, and she tries to understand what had happened to her. Three letters carved on her neck: K. E. R. (Ker, the goddess of death) are a physical reminder of her connection with dangerous Danilo Peña, also from the same background.
Jana was used by Gavril Bolanaki, the drug baron replaced by the shadowy Old Man controlling the ever-changing market, and is convinced that her nemesis Danilo took over Bolanaki’s business and intends to destroy her in the process. He appeared in her neighbourhood at the time of the heroin-capsules-explosion, and only failed to beat her to death thanks to the intervention of a young man, Robin Stenberg. Within hours he was killed in own flat.
Jana’s colleagues are unaware of the connection between her and the new victim, and battle with their own private and personal issues, struggling to work as a team, with rivalries, office politics and resentment tainting their work. They soon realise that inroads into the investigations of Pim and Stenberg’s deaths are being thwarted by a mole in the team.
Emelie Schepp’s Marked For Revenge follows the author’s debut Marked For Life, focusing on child traffickers. Book number two takes on the international drug trafficking ring connected to high-ranking officials within the legal system. The Jana Berzelius trilogy reminds me of the lead character in the Crow Girl by Erik Axl Sund, also highlighting deep-seated childhood trauma, being secretive to the point of being detached from others and a split personality manifesting itself in erratic actions.
Marked for Revenge is a gripping and intense story, yet the plot moves in too many directions with more emphasis on the personal issues of the group of investigators rather than detective work where results seem to appear at convenient times. The novel benefits from incorporating a real-life event which gives it an authentic feel. However, some of the language feels forced and dialogue comes in quick, intense spats, better fitting for a TV screen. No mention of the translator Suzanne Martin Cheadle in the book made me search the internet for this information which I think is vital in translated books.