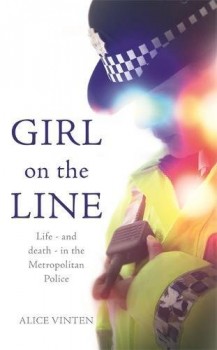 Girl on the Line

An account of Alice Hearn’s life as a female officer in the Met from idealistic beginnings to a soul-wearing ending.

The latest book to sport ‘girl’ in its title tells the story of Alice Hearn (Vinten is her married name) from her first days as a bright-eyed and bushy-tailed recruit at the police training college in Hendon to her retirement from the force, struggling with the demand of motherhood and crushed by the weight of post-traumatic stress disorder.

From idealistic beginnings to a soul-wearing ending, Girl on the Line tells the story of the ups and downs of modern policing in a way that few crime novels manage to capture. There’s plenty of authentic details and dialogue to make this account of policing in the Met a useful one for crime writers as well as anyone wanting a glimpse into real-life policing. Vinten has to deal with strip-searching drunks, managing violent offenders and finding dead bodies, to name but a few of the common occurrences in a copper’s everyday life.

The book covers a decade in the life of a woman officer but it’s hard to place the book in time, and Hearn gives no clues. The story begins in October but there is no hint as to the year, which left me rather adrift in the narrative, looking for something to anchor the story in time as well as place, which also proves problematic. When she graduates from Hendon two years later, we know that Vinten has a posting in the Met, but again, there’s little sense of place. Most of the action takes place in Brixley, somewhere Google maps failed to find for me, although a mention of Brixton did make me wonder if a ‘find and replace’ on the name had failed on that occasion.

Vinten’s life as a police cadet gets off to a shaky start when she finds out that she’s pregnant, but she doesn’t feel ready to abandon her hopes and ambitions, so chooses abortion over keeping the baby, a choice that will haunt her for years, especially as she decides not to confide in her parents.

Although Vinton later marries a fellow officer and has children, while continuing to work, she still appears to judge herself harshly for making that choice, and much of the book is concerned with how her feelings as a woman and a mother affect her in what is still a very male-dominated environment where it’s important to be seen as one of the boys, which is another way of saying that it’s necessary for women to put up with a large amount of misogynistic bullshit in order to succeed in the Job. There also seems to be a hell of a lot of drinking involved.

Girl on the Line presents an unvarnished account of what it’s like to be a woman policing the streets in London. Whether it will act as a recruitment poster for the Met or simply fly a large red flag warning others to keep clear is harder to say. The short, sharp chapters, all headed with the name of someone who featured in Vinten’s working life, move the story along at a good pace and give an intriguing insight into what it’s like to be a woman in what still seems to be very much a man’s world, despite a woman now serving as Commissioner of the Metropolitan Police. If you liked The Bill and still binge-watch police dramas on telly, this is definitely one for you.