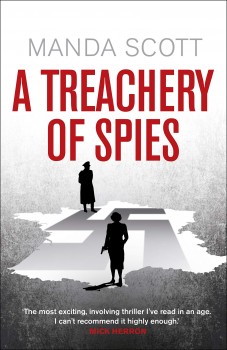 A Treachery of Spies

A series of murders in modern-day Orleans appears to be linked to events over 70 years old - the struggles of French resistance fighters battling the Nazis.

Police Inspector Ines Picaut is called to an Orleans car park where Sophie, an old woman, has been found shot and mutilated. The death has signs of both a professional hit and revenge visited on traitors to the resistance during WWII. It is soon discovered that the woman was active in the Maquis de Morez, based at Saint-Cybard in the Jura, and that several members of her old group are now living in Orleans.

Interleaved with the tale of Picaut’s investigation is the wartime story, beginning with Patrick and Celine who were dropped into France and formed the backbone of the Saint-Cybard group, and Laurence, who trained them and remained their contact back in England. The Maquis face the local German in charge, Kramme, a man who enjoys killing and torturing, and are further challenged by a double agent within their ranks.

Sophie’s clothes contain a hidden compartment containing a card for Elodie, a producer at Radical Mind, a production company making a dramatisation of wartime events at Saint-Cybard. It appears that this has stirred the waters, for further deaths follow. Elodie seems to have a crucial role, but disappears while returning from a visit to the US. Picaut’s enquiries establish that a death there also seems connected to events in France.

Manda Scott has produced a range of historical fiction including series set in Rome, one based around Boudica, and another in the 15th century France of Jeanne d’Arc. In an afterword to her latest work, the author says she valued the opportunity to ask those still living for their recollections of the time, which has doubtless informed her narrative.

Scott undoubtedly conveys some of the feeling of the time: the belief in a common cause, and willingness to make great sacrifices, in a way that it is difficult to imagine could be replicated today. She also convincingly explores the close relationships formed when death and torture is an ever-present threat. Personally I would have liked to see a bit more action, but the book holds the attention.

What I did find a little hard to swallow was the active engagement in 2018 of people who fought in 1945. Much as one would like to look forward to waving guns at life-long foes, the sad truth is that for most people in their 90s, standing up is about as much of a challenge as they can handle.