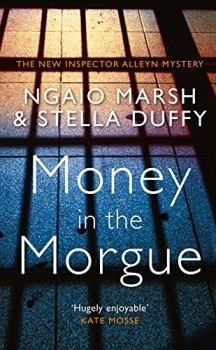 Money in the Morgue

A government paymaster is trapped overnight at an isolated hospital. With the telephones out and the nearby river about to burst its banks in a storm, the payroll disappears from a locked safe. When bodies follow, Scotland Yard Inspector Alleyn must investigate.

Dame Ngaio Marsh, one of the acknowledged queens of the Golden Age of detective fiction, wrote more than 30 novels and her protagonist Scotland Yard Inspector Alleyn became one of the biggest sellers of the age. But Marsh’s real passion was the theatre, where she both acted and produced. She is credited with almost single-handedly reviving the New Zealand public’s interest in the stage – and many of her stories have a theatrical setting.

Now, almost 40 years after her death, the Alleyn series gets its final outing. Marsh began – and abandoned – this story during the middle years of World War II. It has now been picked up and completed by Stella Duffy who captures Marsh’s style, dialogue and mood quite brilliantly, so that it is quite impossible to spot where one leaves off and the other takes up the tale.

In keeping with Marsh’s love of the theatre the duo have ingeniously re-created A Midsummer Night’s Dream with a strong, flat Kiwi accent, corpses, clues and all.
Pompous and endlessly self-important government paymaster Mr Glossop is stranded overnight at the isolated Mount Seager Hospital on the lonely Canterbury plains when his car breaks down. A storm knocks out the telephones and the nearby river threatens to burst its banks.

Trapped at the hospital with him are a group of quarantined soldiers all suffering from cabin fever as they await discharge and a return to their units, a dying elderly man, three young employees involved in a love triangle, and an elusive ‘patient’ whose origins are a mystery to all except one of the staff.

Overnight, the payroll disappears from a locked safe and when bodies begin to appear the ‘patient’ is forced to reveal that he is none other than Alleyn, sent to the area on a counter-espionage assignment.

If you’re new to Golden Age stories, this is a classical example which, read as a standalone, should send you to the library to look out more. The theatrical plot, the almost endless false trails and red herrings, the love interest, the period feeling and the romantically wild settings of New Zealand are almost standard. And what must surely be Duffy’s introduction of some serious social comment – the treatment of the indigenous Maori population and the widespread resentment in New Zealand, itself under threat of Japanese invasion, but seeing its young men sent far away to fight for the ‘Home’ country after the enormous proportional losses the Dominion incurred in the First War – adds piquancy to the story.

Alleyn’s gentle, calm and always understated style is well portrayed. Having been sent to the backwater of Mount Seager on secret business, he could hardly have expected to be drawn into dealing with payroll theft and death over the course of one long night, but as always works his way steadily through the problems.

Long-time Alleyn aficionados may find his constant references to the Shakespearian play so far out of character as to be almost pretentious, but overall this well-written story has the flavour of a Golden Age mystery with a satisfying puzzle and plenty of suspects.

The supporting cast all have their parts to play, with something to hide, fears and secrets. While the lovers often struggle a little, the three Kiwi squaddies and their implacable and unflappable sergeant are great and authentic characters and the pompous volunteer paymaster Glossop is a perfect caricature of his type.

While it’s not a Marsh original, this is a most enjoyable and intriguing read and deserves every success it achieves.