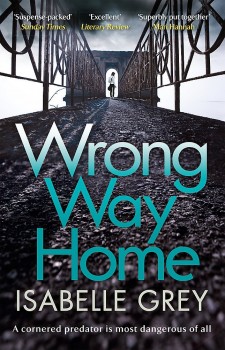 DI Grace Fisher of the Essex Major Investigation Team re-opens a 25-year-old cold case in which a girl was raped and killed. The possible involvement of a local hero and a young true-crime podcaster hampers her investigation.

The unexaggerated and unpretentious Fisher, a detective who cares both about her job and those affected by the crimes she investigates, is working on a 25-year-old cold case where a 19-year-old girl was raped and murdered near the site of a major fire at a Southend entertainment complex. Advances in DNA science have opened new avenues of the inquiry, but also thrown up more than circumstantial evidence that the local police were less than diligent at the time of the original crime.

On the same night a businessman, now regarded as a local hero, saved two young men from the burning Marineland resort. The killing took place minutes from the scene of the fire, a culmination of a series of brutal rapes in the town. The killer was never found.

Now, while Fisher hopes to finally catch the culprit, the evidence does not point to one clear suspect and she must reconstruct the original investigation. But she has to proceed with care, knowing any open suggestion of corruption will alienate her colleagues and damage her chances of finding the truth. And the fact that her investigation is being shadowed – even hampered – by a young true-crime podcaster backed by her old sparring partner, veteran Daily Courier crime reporter Ivo Sweatman, adds to the pressure.

Internal police politics, relationships past and present between the force and the press; the role and cost of technology; the effects of time on the family of the victim, the perpetrator and their relationships; the changing nature of policing in respect to corruption and crime against women are among Grey’s sub-plots, all of which subtly point up police budget constraints and their effect on whether a case is pursued to the very end.

In her downbeat, understated style, Grey drags the reader into Fisher’s thoughts, sharing her frustrations, breakthroughs and stumbling blocks alongside personal dilemmas over the value and role of her connection with others on both a personal and professional level. This often leaves an intelligent reader a step ahead of her investigation, based on hints and stray bits of information, but this is where Grey is so superior to the great number of ‘lone wolf’ authors whose detectives do things that in the real world would not be allowed, as well as damaging the ability to convict.

Fisher’s problems stress the need for irrefutable evidence and the frustratingly slow search for support from senior ranks and give an insight into how difficult it is for police to present a case the Crown Prosecution Service will be willing to pursue with a realistic prospect of conviction even in the most serious of crimes.

And it is this constant internal struggle which makes her stories both relevant and believable. All this, plus some clever characterisation of her principals – Fisher, driven young podcaster Freddie, so desperate to break into mainstream journalism, and the reformed alcoholic reporter Ivo, haunted by a past of failures and compromise – serve to heighten the intensity of the story.

So too does its setting. Southend, once London’s playground, is now a dismal shadow of its former self and one of Essex’s most deprived areas with eight council wards among the most deprived in England and a child poverty rate of 12 per cent – a suitably grim background for a dark and twisted story.

I’m not going to ruin a quite brilliant book by revealing its plot. Grey, who honed her skills in television and film, is totally in touch with 21st century policing and public attitude. Although part of a series, it works well as a standalone, with enough hints to enable readers to fill in the back story where relevant.