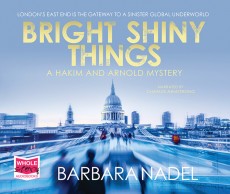 East London PI Lee Arnold and his friend and assistant Mumtaz Hakin set out to track down a young radicalised Muslim man in the hope that he’s decided to turn his back on ISIS.

Lee Arnold, a former soldier and ex-copper, scrapes a living as a private investigator in London’s East End. His partner, Mumtaz Hakim, is a Bangladeshi Muslim woman still struggling with the lasting effects of an arranged marriage that ended badly, and is doing her best to keep her daughter out of the clutches of a sinister gang boss who blames Hakim’s family for the death of his son.

It’s not only Hakim’s past that casts a long shadow over the pair. A friend from Arnold’s army days – a former Iraqi interpreter from the second Gulf War – calls on his help when his radicalised son sends home a priceless relic that his ISIS masters would ordinarily have destroyed. Abbas al’ Barri and his wife see this as a sign that their son Fayyad wants to get away from the Caliphate and return to the west. Arnold isn’t convinced but out of loyalty to an old friend agrees to investigate.

With Hakim’s help, Arnold hatches a dangerous plot to get close to the ISIS fighter to see if he really does regret going to fight in Syria.

This is the first time I’ve encountered Barbara Nadel’s Hakim and Arnold series, and I was quickly sucked into the rich, colourful, noisy world of the Bangladeshi community in east London, peopled with a host of larger than life but always believable characters such as Rajiv Bannergee, a flamboyant cross-dressing shop owner who provides a strong crime sub-plot for the book. Another favourite was the down-to-earth, sarcastic copper Ricky Montalbano who’s totally at home in the diverse community he’s responsible for policing.

The book doesn’t shy away from the harsh realities present in the East End’s multi-racial community, with stacks of gang crime, violence, intolerance and the harsh tenets of radical Islam. Nadel amply demonstrates how easy it is for teenagers to become radicalised, and the use of social media in this context is prominent, with Hakim doing her best to pass as a teenager on Facebook in an attempt to get close to Abbas al’ Barri’s son.

Both plot and sub-plot are strong and Charlie Armstrong’s narration provides plenty of depth, as he switches effortlessly between a variety of voices, equally at home with the women as the men. I was gripped for nearly ten hours listening time by this story, stopping only to negotiate Paris in the rush hour.