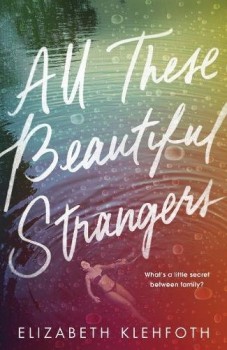 All These Beautiful Strangers

Charlie Calloway’s mother disappeared ten years ago. Rumour has it that her rich, powerful father was responsible. Charlie never believed the rumours, but she still wants to know the truth.

Seventeen-year-old Charlie Calloway has it all: a rich, powerful father, a place at a prestigious boarding school, plus academic and social success. But she wants more. She wants membership of the school’s most exclusive club, the A’s. You don’t choose to join them, they choose you. And to gain admission, the initiate must undergo a series of gruelling tests. Charlie is excited but also apprehensive when the secret summons arrives. She wants in, but it’s not going to be easy.

Charlie wants something else, too. She wants to know the truth behind the disappearance of her mother, Grace Calloway, ten years ago. Popular belief holds that Charlie’s father Alistair killed her and hid the body, but Charlie has been brought up to believe her mother left of her own accord, stripping a large amount of money from the family’s accounts at the same time.

Knollwood Augustus Prep School hides a multitude of secrets, as all the A’s initiates must do something that gives the other members a hold over them, and it’s soon clear that the A’s are quite capable of ruthless take-downs of anyone who doesn’t succeed in joining their ranks as well as anyone who threatens their privileged existence, students and teachers alike. The unsubtle bullying is laid bare even seen through Charlie’s rose-tinted glasses, exposing the dark heart behind the unholy trinity of money, glamour and self-interest.

The primary character in All These Beautiful Strangers is Charlie, but the book later on interweaves chapters from both her mother and father, all told in the first person. Charlie is such a strong narrator that at first I found the passages telling the backstory of the relationship between her mother and father rather intrusive, but as the story developed, I began to take more of an interest in how Grace and Alistair each related their own version of events, and enjoyed the insights these chapters provided.

The more Charlie digs into the circumstances of her mother’s disappearance, the more she becomes interested in the story of Jake Griffin, one of Knollwood’s golden boys, who stunned the school by committing suicide at the time her father was studying there. Jake and her father were pictured together in the school yearbook, yet Alistair denied any friendship with him. The more Charlie picks at the threads of the past, the more its secrets start to unravel.

All These Beautiful Strangers is a heady mix of thriller and teen relationships which sees Charlie Calloway struggling to balance friendships and her need to belong to the school’s secret elite with her innate moral compass. This is a strong, confident debut that delivers a complex page-turner packed with intrigue and danger.