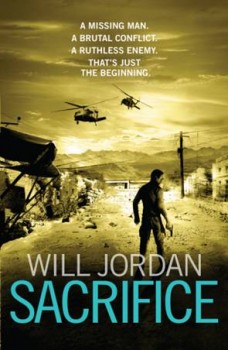 Ryan Drake and his Shepherd team specialize in finding people and bringing them back. This time they’re off to Afghanistan to bring back a senior CIA operative held by insurgents.

Will Jordan introduced his protagonist, Ryan Drake, in an enjoyable an assured debut, Redemption. Drake, an ex-British Special Forces soldier now working for the CIA, makes a welcome return in Sacrifice and the story picks up some of the strands of his previous book, but without too much in the way of background information dumps.

Drake runs a Shepherd team, a covert unit set up to deal with find and retrieve mission. In Redemption, the enigmatic female agent Maras had to be retrieved from a high-security prison in the wilds of Siberia, whereas here, he needs to find senior CIA agent Hal Mitchell, taken captive by insurgents after the Black Hawk helicopter he was in was shot down in Afghanistan.

Sacrifice sees the return of veteran sniper John Keegan and IT specialist, Keira Frost, both picked to accompany Drake on his mission. The book also brings back Drake’s target from his earlier outing, Maras, now known as Anya, providing a love interest for our hero, as well as furthering the plot about intrigue at the heart of the CIA. The book’s strength lies in its well-depicted characters and realistically described action scenes. Extraneous detail is kept to a minimum, and as a result, the plot moves along briskly, told predominantly from the points of view of both Drake and Anya.

The backdrop to the book is the intriguing topic of private military contractors in modern warfare. Not so long ago, they would just have been called mercenaries, but now soldiers for hire have become big business, a far cry from the days of ‘Mad Mike’ Hoare in the Congo and other conflicts. Horizon Defence has a lucrative contract with the US government to supply additional men for a variety of purposes and at times seem almost a law unto themselves, much to Drake’s disgust, especially when they prematurely destroy the remains of the helicopter that had been carrying Mitchell, thus potentially wrecking vital clues to what really happened. The more Drake digs, the more he becomes concerned about Horizon and their activities.

Jordan writes a very competent and enjoyable thriller. There's nothing too complex, but certainly not over-simplistic either. I hope he doesn’t overplay the ‘star-crossed lovers’ trope too much in future books, but if he can stay clear of pitfalls like that, I expect he’ll keep delivering the goods for some while to come. If you like Matt Hilton and Sean Black, Jordan is definitely a writer for you.