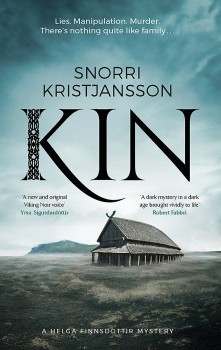 When the adult sons and daughter of Viking chieftain Unnthor Reginsonn are drawn back to the isolated family farm in search of his fabled wealth, murder follows. Adoptive daughter Helga Finnsdottir must find the killer.

Snorri Kristjansson brings a dark age to vivid life in this dark mystery of familial tension and murder which will appeal both to fans of character-driven stories and those who favour historical fiction.

There’s a hefty nod to the influence of Agatha Christie – readers will recognise the setting of a family at war with itself assembled in an isolated house – and more than a touch of Lindsey Davies’ woman detective Flavia Alba in Helga Finnsdottir, truly an Alba with runes, the smart, sassy adopted daughter and the only one with enough detachment to solve the riddle of two carefully orchestrated killings.

Kin is set shortly before the end of the first millennium. Helga is growing to maturity in the isolated Riverside Farm, the home of Unnthor Reginsonn and Hildigunnur, acknowledged as the lord and lady of the Ren Valley. Although now a successful farmer, Unnthor dominates his neighbours through his reputation as a fearsome Viking raider and rumours abound of Unnthor’s Hoard, a fabled cache of stolen treasure.

Hildigunnur has a reputation for wisdom and knowledge, along with a broad mind, a quick tongue and the ability to keep her violent husband almost completely under her thumb. Local women speak of witchcraft, something they dare never dare say in her presence, and she uses these rumours to enhance her standing.

With their four children grown up and pursuing their own lives, they have adopted Helga, whose early life is a mystery, 12 years before and have come to love the intelligent girl who has become a second daughter.

Hildigunnar is an expert in human behaviour and Helga, a keen and willing student, is absorbing knowledge and learning to use her own intelligence to read most situations – a detective in the making.

The story opens with the return of all four adult children, none of whom Helga has met before. The three sons and one daughter return with their spouses and four grandchildren. With the addition of family retainer Jaki and his son Einar, that is pretty much the cast. Old tensions resurface and it becomes obvious that the children have been drawn back by their greed for Unnthor’s fabled riches. The dark, saturnine eldest brother Karl and the giant Bjorn immediately return to childhood rivalries and the atmosphere sours.
When Karl is found dead in bed, and Bjorn is also murdered within days, Helga realises a ruthless streak in the family is putting an innocent in danger, and must work quickly to reveal the guilty party.

Kristjansson structures his plot to allow slow introductions to the potential victims – any one of whom could be the killer. With the exception of a couple of the wives, who are thinly sketched, the characters are well defined and all, in their own way, quite engaging.

This story of intrigue and murder is well paced and skilfully plotted, with a strong sense of everyday life and just enough runic mystery and magic to give it an extra twist. If the ending is unexpected, it is completely in keeping with the dark and savage times when the Vikings terrorised the coasts of Britain, Ireland and northern Europe with their brutal hit and run raids seeking treasure and slaves. Helga Finnsdottir is a sparky heroine – a beacon of light in a dark age.