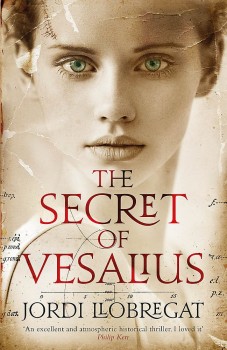 The Secrets of Vesalius

Daniel Amat returns to Barcelona after the death of his father and is plunged into dark mystery of murder and scientific experimentation.

Jordi Llobregat, a director of the Valencia noir fiction festival, has been writing since the age of 12, but apart from short stories, this brick of a Gothic horror story set in fin-de-siecle Barcelona in the run-up to the 1888 World Fair, is his first novel. It’s been brilliantly translated by Thomas Bunstead to retain virtually all its original impact, and is basically a reworking of Mary Shelley’s monster hit Frankenstein.

The action centres on three main protagonists: an Oxford lecturer, a young medical student and a hard-nosed, but fading, journalist. All three, even the journo, who is not quite so unscrupulous as he likes to think, are likable enough in their own right. They must face, either individually or together, a series of threats and challenges from a variety of persistent and unpleasant adversaries.

But despite Bunstead’s devoted work, this hardly has the impact of Shelley’s superb story. It’s close to double the length, far too verbose in a very Spanish fashion, padded out with medical history and myth, missing manuscripts, codes, even a reference to Jack the Ripper! It is really little more than a romantic fantasy with all the standard themes and situations that occur in classic horror literature. Its atmospheric setting and nature means it works quite well at times, but in its search for effect far too often veers off into flights of fancy which stretch credibility.

Daniel Amat has an assured future at Oxford University and the prospect of an advantageous marriage. A letter from Barcelona informing him of his father’s death recalls the reasons why he left Spain to put his past behind him. He returns to the ancient and labyrinthine city, pre-occupied by the great World Fair, and haunted by tales of fearful murders – with the victims bearing the marks of an ancient curse.

Daniel’s inquiries about his father’s last days show an unusual pattern of behaviour and an obsession with the work of the 16th century anatomist Vesalius. He follows a series of leads into Barcelona’s hidden underworld of poverty, vice and crime – and eventually into the web of tunnels, some dating back to Roman times, beneath the streets of the city. There, together with his two collaborators, he faces a terrible confrontation which could destroy the Fair – and bring the dreadful secret of Vesalius to life.

This long novel is solidly grounded in place and time, and is well paced and incident-filled. The plot is linear, but holds few surprises. The well-drawn characters are the most enjoyable and successful part of the book.

In the final analysis, although enjoyable, the story tries to be too many things to too many people and in the end loses itself in just too much unbelievable detail – and the final chapters venture close to the realms of ridiculous.