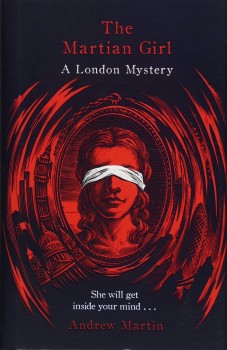 Failing journalist Jean becomes obsessed with the mystery disappearance of a rising Victorian music hall star. As she pursues her investigation, the lives of the two women begin to blur together and plunge her into danger.

Barrister-turned-writer Andrew Martin, the author of the Jim Stringer railway thrillers, shows a different side to his nature with this ingeniously constructed, clever mixture of past and present, metaphysical and the horrifyingly real, madness and the sanity of devotion. It’s a violent, often funny, deadly serious, combination that adds up to complicated, compelling and thrilling reader entertainment.

Martin tells two stories, separated by more than 100 years, but linked over time by events, places and outcomes.

In modern London, Jean, a late 30s unsuccessful journalist, is involved in an affair, sexually satisfying but without feeling, with a handsome, arrogant former barrister, known only by his surname. Unsure of her lover, his strange moods and actions and desperate to develop her career, she begins to write a one-woman show about a mind-reader she comes across in her research – a striking young girl on her way to the top of London’s late 19th century music hall billings before disappearing without trace.

In 1898 London, Kate French is honing her craft, performing each night with the partner in her act, the cynical Joseph Draper. But she soon discovers she has an unexplained – and horrifying – talent as at the same time she wonders about the money-obsessed Draper and the possible fate of his previous partner.

As Jean makes progress she comes to realise that her show can never do Kate, who is now dominating her thoughts, full justice, and turns her research into a novel. She becomes convinced that Draper fully believed Kate’s ability to read minds and that, with a murderous past to hide, he found the idea deeply disturbing. She worries over why she feels this intense bond with Kate, who performed under the stage name of The Martian Girl, and as the line between the two begins to blur, their fates are destined to intersect.

Meanwhile the mental state of her psychopathically unstable lover Coates, chillingly portrayed and horribly believable, deteriorates. His fantasies, sexual deviations and excesses of drink mount – and he becomes a real danger to both Jean and his own wife and family.

Martin has produced an absorbing and well-written story, with rounded and engaging characters. Life in the late 19th century English music hall is portrayed capably and believably with the explanation of any mind-reading act based upon on an elaborate system of verbal cues particularly interesting.

Martin illuminates his characters in an often wry, almost amused tone with a vocabulary that remains as striking as any of his earlier work. This is a quite dazzling thriller, a piece of violent, funny, deadly serious entertainment, which will get inside your mind. It’s a book that demands concentration, but is well worth the effort. You may well find yourself unable to put it down – right up to the final few pages which reveal an unexpected, but very much in keeping, twist.