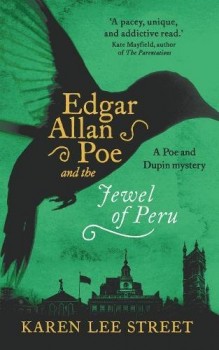 Edgar Allan Poe and the Jewel of Peru

Edgar Allan Poe believes his family may again be under threat from the past as an influx of immigrants disrupts traditional city life. When a young heiress he is reluctantly helping disappears, he is forced to call for help from his French detective friend the Chevalier C Auguste Dupin.

The life – and death – of Edgar Allan Poe, generally considered the inventor of the detective fiction genre and a major contributor to science fiction, was as strange and macabre as many of his stories.

In 1849, the man the Mystery Writers of America named the ‘Edgars’, their awards for excellence after, was found wandering and dying in a Boston street – wearing someone else’s clothes. Often portrayed as ‘a mad genius’ or ‘tormented artist’, his personal struggles blending with those from characters in his stories, newspapers reported his death as ‘congestion of the brain’ or ‘cerebral inflammation’ – euphemisms for alcoholism and other less savoury causes. While the actual cause remains a mystery, speculation included DTs, heart disease, epilepsy, syphilis, meningeal inflammation, cholera, and even rabies.

This is the controversial and undoubtedly strange character Karen Lee Street has chosen to portray in her debut trilogy which combines both literary historical crime and Gothic mystery, set in London in 1840; Philadelphia, 1844; and Paris in the year of Poe’s death.

In this second part, Poe is in America with his young wife Virginia and his mother-in-law. At the same time a young heiress demands his help to discover why her lover died at the city’s docks on his return from an expedition to Peru. Poe is sceptical of her claims to receive messages from birds and visitations from her lover’s ghost.

But when she is kidnapped, he is forced to summon his friend, the legendary French detective le Chevalier C Auguste Dupin, to unravel a mystery involving old enemies, lost soulmates, ornithomancy, and the legendary jewel of Peru. Dupin, Poe’s most dominant and successful character, again appears as a real person, but is once more difficult to separate from the jittery, death-obsessed author.

Their mirror image complexes, phobias and insecurities all add to a superbly morbid and dark mystery. Clever, witty, and wonderfully researched, it offers a re-imaging of the salient details of Poe’s life, and the repositioning of his relationship with his finest literary creation. A common trend among Poe imitators has been claims by clairvoyants or psychics to channel poems from his spirit, usually reworkings of famous lines such as The Bells, with a new, more positive outlook, but Street needs no such aids.

This pacey, unique and addictive story, successfully combining historical fact with fiction, works either as a standalone or part of an enthralling series and is a treat for fans of the master of the macabre. Street’s lush, sumptuous and at times delightfully morbid literary style is not unlike that of Poe, complete with the occasional touches of the macabre and melodramatic. Her depiction of Poe’s relationship with his young wife and his mother-in-law is skilfully drawn and very touching.

Her method in the apparent madness and inconsistencies of various points builds to a crescendo as the plot is finally revealed and the villain exposed. This dark, satisfying mystery, combining beautiful writing with suspense and unease, is a hugely intelligent literary crime thriller that will keep you guessing.