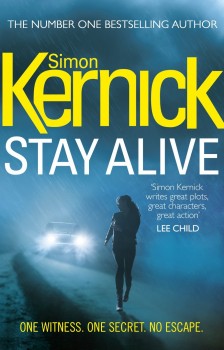 A family canoeing trip leads to terror for teenager Jess Grainger when she ends up helping a mysterious woman escape from the men with guns who are clearly trying to kill her. Jess soon discovers that they’ll kill anyone who gets in their way.

When it comes to thrillers that hit the ground running and then barely stop to draw breath, Simon Kernick is one of the best, and his latest offering is well up to standard. Stay Alive kicks off with the story of Amanda Rowan, who arrives home to discover that if there’s one thing worse than discovering your husband is carrying on with another woman in your own house, it’s coming home to find your husband and his lover murdered in your bedroom. Oh, and to make things even worse, the killer is still there, and he’s going to make sure you don’t escape him for long.

The murderer is believed to be a brutal serial killer known as The Disciple, who picks isolated cottages like Amanda’s, torturing his victims, before using their blood to daub Satanic symbols on the walls. Amanda is the only person to have seen him and the police spirit her away to an isolated safe house in Scotland while DCS Mike Bolt does his best to catch the elusive killer.

But the safe house isn’t as safe as it should be and Amanda finds herself on the run again, pursued by gunmen who seem to want to take her alive, whilst ruthlessly taking down anyone who happens to get in their way. Former firearms unit officer Frank Keogh is very definitely not on the side of the angels any more. He’s the one who’s been given the job of capturing Amanda Rowan, and he’s not going to let anyone stand in his way, and his scruples about not wanting to kill children only go so far.

When Amanda crashes into the middle of a family canoe trip, Jess Grainger and her family do their best to help, but they’re no match for Keogh and his decidedly unsavoury associates.

The relentlessness of the pursuit in Stay Alive reminded me of Sarah Connor’s desperate attempts to stay alive in The Terminator films, and the book’s very much a case of One Thing After Another, with its constant twists and turns, but it’s none the worse for that. The arrival of former soldier Glenn Scopeland, better known as Scope, a returning character from previous books, provides some possible help for the beleaguered Jess, but he’s out-gunned and out-numbered, and in the middle of nowhere.

Stay Alive is a great example of a book where seemingly ordinary people are thrust into extraordinary events and have to sink or swim, something that’s often been a theme in Kernick’s books. He writes action well and fluidly, his characters come over as real people and the action never flags for a moment. This is a book that I galloped through in one sitting, refusing to be distracted. If you like your thrillers to live up to their name, Kernick is definitely an author to go for. He consistently delivers edge of the seat entertainment, and if I ever end up in a tight spot, I know I’d want Scope watching my back.