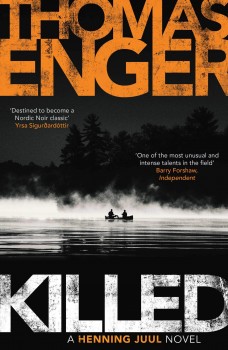 Henning is determined to discover who killed his son. But his determination will cost him dearly.

Henning is a desperate man. He is alone with his memories, alone with his pain, alone with his physical scars. His son is dead. His ex-wife pregnant is with his best friend’s child. The only thoughts driving each step he takes, along with his desire to stay alive, is the need to find out who killed his little boy and why. Once he knows, he won’t give a damn what happens to him.
But each time he plunges his investigative shovel into the mire, it costs him. He sees betrayal at every turn. He leaves a trail of death as his investigation deepens. Friends, family, colleagues all add emotional scars. He can trust no one, certainly not his sister. And the body count racks up until he is almost the only one left.
I am in the position of reviewing the last in an obviously intricate series without having read the earlier books. So, to that end, the emphasis of this review is on the writing, not the story.
I have often likened my late arrival to a book series to turning up late for the party. Killed is no exception. In many ways it is worse as this novel is a party with almost as many VIP guests as Harry and Meghan invited to their wedding – all important and all with complex backstories.
The number of characters was even more intimidating thanks to a detailed cast list. Finding the list filled me with the same fear and dread that I had when I opened Shakespeare’s Henry V for the first time. And I never took to the Bard. Either my schooldays association made me circumspect, or it is because I am of the opinion if the author must list a cast of characters there are either too many or he/she hasn’t introduced them effectively within the story. Either way, it didn’t bode well. I read the cast list and felt confused by reading about each character in isolation. They were indistinct trees in pots, with no sense of being grounded in their surroundings.
The plot is multi-faceted and gritty. From the start it gives a sense of the author pulling together many loose ends and tying them into a perfect bow. But it would be wrong of me to give any more away for those who have been following this series. However, I wouldn’t recommend jumping in to Killed without reading the earlier books, because its sheer complexity scrapes away at any chance of the reader investing emotionally in the main character, let alone any of the major players. It informs. It leads the reader through a maze of false starts, half-truths and reasonable twists, though the culprit comes as no great surprise. It provides an overview of the milieu, and I feel I have visited the streets of Oslo and beyond. I would also say the weather becomes its own atmospheric character.
That said, the author does not have a senses-driven writing style. He tells the reader. He does not connect the reader with their senses other than the visual. There is a plethora of brown hair, blue eyes and black jeans description. This results in a narrative that feels melodramatic rather than dramatic as the reader just can’t bond with characters whose portrayals glue them flat on the page. That’s a shame, because at its heart, Killed is a study of a grieving father’s darkest moments intertwined with a sinister plot.
Dialogue is sharp and well written. And it balances well with the introspection and action. However, two aspects pulled me out of the story on several occasions. First, most readers do not need telling the same thing twice, first with a description, and in the next line through dialogue. Second, there are several irritating typos and editing oversights.
I must take the time to read the prequels to Killed then re-read this novel to see if it changes my opinion.