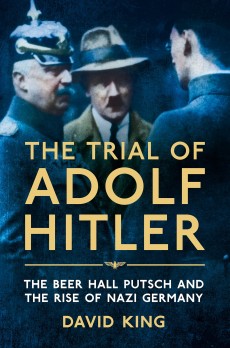 The Trial of Adolf Hitler

The true story of the 1923 ‘beer hall putsch’ and subsequent trial, which provided Adolf Hitler with a great opportunity for publicity, kick-starting his rise to power.

Anyone who takes an interest in history will have noticed how some professional historians are now writing for the public at large, producing stuff which takes years of research and deliberation but is readable as easily as good fiction. Such books were very rare up to the last few decades, and even now there are few authors who can render bare facts in such a way as to keep a reader glued to the page throughout.

So it is great to find one of these rare birds. This is a story of great historical importance which surprisingly has not appeared before other than in German, told in short chapters packed with incident, but conveyed in a way that teases out the important strands without getting bogged down in too much detail. There is a large section on notes and sources, but no foot-notes to distract the casual reader.

And what a story it is – for modern history they don’t come much bigger. The setting is the Weimar Republic, Germany, in the years following World War I. Resentment over the terms imposed on Germany in Versailles, belief that those at the front had been ‘sold out’ by the self-serving back home, and economic collapse led to anger and despair. Extreme philosophies were debated not only in the press, but also with fists and cudgels on the streets.

Dissatisfaction with the Republic was universal, but Munich had certain characteristics which made it a focus for discontent. Several right-wing groups were active, besides the Nazis, and Hitler had a reputation that was limited to Bavaria at best. This all changed at the Bugerbrau Beer Hall, where three top officials in the local political hierarchy were slated to speak, when the Nazis arrived as a first step in a putsch to replace the government in Berlin.

For reasons King explains in detail, the putsch failed, and the ringleaders put on trial. For treason and other crimes committed during the attempt, the law provided for penalties including death, but to international consternation the court eventually handed down sentences of a few months only. Moreover, the defendants were given free rein for their poisonous political views, and Hitler in particular a forum for his oratory, giving him almost overnight fame in Germany and notoriety overseas.

Looking back from the present day, the excesses of the Third Reich seem almost inexplicable, and a book which helps explain how such terrible things can come about is surely to be esteemed. With the European Union currently looking very shaky, I think it is also a very timely reminder about why, despite its problems, it is such a good idea, and a warning about what can happen if we allow demagogues too much credence.

Oh, and I have to tell you: in Germany, a Hitler-style moustache is known as a rotzbremse, which translates as ‘snot-brake’. Something you needed to know …