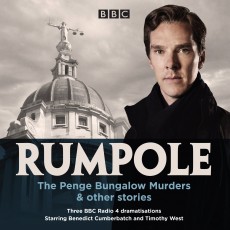 Rumpole: The Penge Bungalow Murders and Other Stories

It’s hard to know how anything could measure up to Leo McKern’s classic portrayal of defence barrister Horace Rumpole in seven TV series made between 1978 and 1992, but I must admit that Benedict Cumberbatch voicing the younger Rumpole and Timothy West taking the part of his older self are a winning combination in these three BBC radio dramatisations

Rumpole and the Penge Bungalow Murders rewinds time to Rumpole’s early career and the case that he always looks back on as one of his finest hours. It’s the 1950s and two former war heroes have been shot dead. What seems to be an open and shut case where everyone else is concerned turns into something a lot more complex for the young Rumpole, who has to contend with a lazy, disinterested QC and his over-keen daughter who has her sights firmly set on someone she sees as a rising star in the legal profession – the young Horace Rumpole himself.

Hilda, already showing signs of the woman she’ll later become – She Who Must Be Obeyed – is not one to take no for an answer and takes it on herself to start pushing Rumpole up the greasy pole in chambers. Blood was always a matter of great importance in Rumpole’s career, possibly second only to his penchant for a glass or several of Chateau Thames Embankment in Pomeroy’s Wine Bar, and this is where it all started. At a crucial moment in the case, Rumpose’s leading barrister goes AWOL and Rumpole has to step up to the plate.

In Rumpole and the Family Pride, Rumpole and Hilda, now married, receive an invitation to visit Hilda’s cousin in Sackbut Castle in the wilds of the Yorkshire moors. Hilda’s keen to hob-nob with the gentry, but her husband has to be prized away from his beloved haunts in and around the Old Bailey. Naturally, there’s more to the invitation than meets the eye, and Rumpole has to set to work solving the mystery of a woman who’s inconvenienced the 17th Baron Sackbut by turning up dead in his ornamental lake. Rumpole is also engaged in the not inconsequential matter of a defence to a triple murder. Not that Hilda regards that as a good reason to stay in London!

Rumple and the Eternal Triangle showcases a different side of Rumpole as he engages in some light-hearted flirting with Elizabeth Casterini of The Casterini Trio, an accomplished and beautiful concert violinist. Her husband has been arrested for the murder of the trio’s cellist. Whilst not actively contemplating infidelity – he probably wouldn’t dare – Rumpole does engage in something of a dalliance as he tries to disentangle the complex web that connects Elizabeth to the two men in her life.

I’ve loved Rumpole of the Bailey for the vast majority of my adult life, even though I never felt any inclination to follow him to the Bar. The wine bar would have been a much preferable destination. I can sink bad red wine with the best – or worst – of the legal profession. I spent a lot of my legal career a stone’s throw from a clutch of provincial chambers and I can happily – and truthfully – testify that John Mortimer’s portrayal of barristers is not a million miles from the truth, from the obsequious clerks who rule their chambers from behind the scenes, to the leading counsel who like to leave everything to their juniors whilst still hogging the limelight in court. None of them were ever quite as entertaining, or as passionate in defence of criminal underdogs as Rumpole, but there were a few who ran him a close second.

Rumpole is a defence barrister through and through, and I particularly enjoyed the depiction of the extended Timson family, a bunch of relatively small-time villains who provide Rumpole with a steady stream of bread and butter work, even though there are times when they are stubbornly unwilling to be saved from themselves. Hilda is an indomitable delight, and mental pictures from the TV series kept coming back as I listened to Cathy’s Sara’s perfect take on her. All the characters fare well in this series of dramatisations, and the stories have been well-adapted, without ever feeling rushed.

If you haven’t met Horace Rumpole before, you’re in for a treat. If you already know him, pull up a bar stool, pour yourself a glass of Cooking Claret and prepare to be thoroughly entertained.