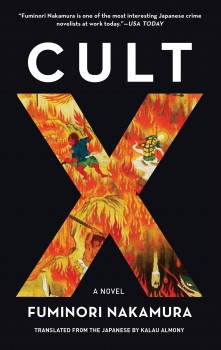 Toru Narazaki, who's searching for a girl who disappeared after a brief relationship, visits an address in Tokyo occupied by a cult and gets drawn into a bizarre world.

When Ryoko Tachibana goes missing, her boyfriend Toru Narazaki hires a private detective to track her down. The detective advises caution, and hands over an address where Ryoko is known to have been seen. Toru visits the address and finds it occupied by a cult, run by Shotaro Matsuo.

Shotaro is not at all a sinister figure, and is a rather reluctant leader, although he is prone to expansive discourses on such subjects as the latest scientific thinking in physics and some parallels with ancient religious writings. Adherents of the cult freely admit that Ryoko had recently spent time with them, although latterly had been drawn into the orbit of another cult, of a more secretive nature.

This second cult turns out to be as bizarre as any of those groups notorious for weird beliefs and fascination with death. The members spend much of the time in a confused state, their lives being a mixture of meaningless sex and slavish devotion to the demands of their leader, who has a clear, if horribly perverted, aim and uses his personal magnetism to set up a bloodbath.

This book is easy to dislike on several levels. The characters revealed in any depth all turn out to have endured terrible childhoods, with absent, indifferent, or hostile parents. As a result, they are either nasty and domineering, or so full of fear and uncertainty that they are easily cowed by anyone who asserts leadership. The behaviour they display is so mechanical it is difficult to relate to, or to accept them as realistic.

Large sections of the book are taken up with lectures from cult leaders, rambling digressions into human nature, the nature of reality, and so on. I have sat through enough religious homilies delivered by pundits of a range of sects to find this sort of thing less than enthralling. I especially dislike spurious claims about the validation of old religious texts through the findings of modern science, always guaranteed to be bogus. The lectures also extend to modern history, with ostensibly revisionist assertions rehashing the conspiracy theories found on the internet. The vast slabs of undigested waffle vastly exceed what would be adequate to substantiate the plot.

Perhaps the most distasteful is, however, the depiction of rape and the supposed sexual gratification of the women involved. Possibly this is intended to demonstrate the depths of depravity of the cult leader, or to highlight the zero-level self-esteem to which the women have been reduced, but to me these several episodes were entirely gratuitous.

Nakamura has released several past titles, and translated versions have appeared, so someone presumably likes this kind of stuff. In my view, however, they should not be indulged.