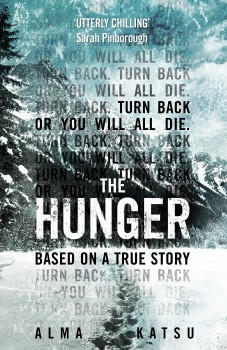 A California-bound waggon train is trapped by winter in the Sierra Nevadas. In an atmosphere of superstition, fear and mutual loathing, some members resort to cannibalism to survive.

The story of the Donner Party is one of the most tragic and disturbing tales of the opening up of the American West. A group of pioneers who set out for California in a waggon train in May 1846 were delayed by mishaps and mistakes, spending the winter of 1846-47 snowbound in the Sierra Nevadas. Some resorted to cannibalism – and of the 87 members of the party, only 48 survived.

Alma Katsu’s slow-moving, but brilliantly brutal and chilling recreation of the facts is tense, gripping and at times deeply disturbing. But these facts are now largely ignored by historians for failing to meet Hollywood’s ‘American Dream’ presentation of the country’s westward expansion with intrepid, noble settlers opening up a fruitful new land.

The former intelligence analyst uses all her skills and experience of human nature to tell her story. She is at her absolute best when forcing the reader to face the unimaginable meeting of ordinary people with extraordinary desperation, using sharp, haunting language to portray the volatility of human nature pushed to breaking point.

Factually, the Donner Party, facing a four to six-month westward journey and already late in the season due to poor leadership, decided to follow the Hastings Cutoff, an unproven route said to trim 300 miles off the journey, but which crossed Utah’s Wasatch Mountains and the Great Salt Lake Desert. The uncharted and rugged terrain and difficulties traveling along the Humboldt River saw the loss of many cattle and waggons, and caused splits within the group.
By the beginning of November, they had reached the Sierra Nevadas and were trapped by an early, heavy snowfall near Truckee (now Donner) Lake. As food supplies ran out, some set out on foot for help. Others stayed – and turned to cannibalism to survive.

This is the story of a dangerous journey, and the assortment of people who undertook it, typical examples of early Americans with some even unable to speak English. Many of them are running from something towards an unknown life they believe must be better. These ‘good’ Christian men and women hide secrets from infidelity, sexual lust, murder and incest, all of which surface as the journey begins to flounder.

Katsu laces her story with damningly clever period cultural observations, such as the suspicion of unmarried men, and she illustrates her wonderfully drawn characters with both flashbacks and letters to explore key back stories. Shortages of food for people and animals, bitter quarrels, and the mysterious death of a little boy, drive the isolated travellers to the brink of madness. And here Katsu introduces the element which makes this book so horrifyingly memorable.
This is the Donner Party with a supernatural twist. Playing on the ignorance and superstitious fears of both native Americans and travellers alike as travellers begin to disappear and fear and suspicion spreads, the survivors start to wonder if there is something disturbing, and hungry waiting for them and whether the unfolding evil around them may have in fact been growing within them all along.

Katsu’s sharp, haunting language, her keen understanding of human nature and the introduction of such a monstrous original metaphor for evil will make you question if the ill-fated Donner-Reed party was doomed from its first mile. But her characters are so compelling it’s impossible not to hope they will escape their inevitable fate. The story ends with powerful and affecting images of both sacrifice and reconciliation.

Katsu’s great strength is that this uneasy, at times nauseous, slow-burning tale marrying historical fiction with the supernatural, with its superb detailing, brilliant characterisation and some supremely ominous moments, is always reined in at the very last moment to rack up the tension even more.

This is a superbly thoughtful, bold and brilliant novel, stretching the limits of human endurance, rich in character, laden with doom, and propelled by chilling mystery. The Hunger is an unsettling and times terrifying masterpiece.

You’ll need nerves of steel to read this. But if you can survive without subsequently suffering nightmares, you’ll have had the satisfaction of reading what is one of my books of the year.