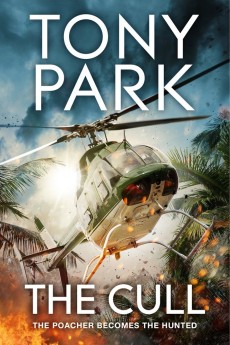 Australian Army Reserve officer and Afghan vet Tony Park divides his time between Sydney and southern Africa, where he boasts of owning a Landrover and a tent, and researches and writes his novels on location.

This third story in the Sonja Kurtz series and his 14th African tale of the ongoing battle to save the continent’s wildlife from poachers – rhino horn is now worth more than gold, diamonds or cocaine – yet again provides a break-neck, but fascinating, insight into what has become a bushfire international war fought with automatic weapons, body armour, night vision goggles and other modern hardware including air support.

The Cull was written on a trip from South Africa to Tanzania, and features real places and people to back Park’s wonderful descriptions of the country and wildlife – his description of the mass herds of wildebeest and zebra crossing the Mala River is both beautiful and stunning. And it also features the gradual breaking down of gender barriers.

The Leopards, the fictitious all-woman anti-poaching unit which Sonja leads, is closely based on the Black Mambas, South Africa’s first such unit who have done so much to empower African women, and who Park first met in his role with Veterans For Wildlife, the UK charity which pairs military combat vets with anti-poaching organisations.

For former mercenary Sonja, a Namibean of German extraction, who served with the British Army’s elite undercover 14 Intelligence Company in the Northern Ireland ‘Troubles’, the chance to lead a specialist squad financed by billionaire British businesswoman Julianne Clyde-Smith, tasked with exposing the continent’s poaching bosses, is one she cannot turn down. But as their operation progresses, the unit finds itself in direct confrontation with an international underworld syndicate willing to go to any lengths to protect its lucrative and bloodthirsty trade.

Then, when Sonja’s lover, safari guide and private detective Hudson Brand, is employed to investigate the death of an alleged poacher at the hands of her team, their mission comes under intense scrutiny. As the body count rises, Sonja, a woman who has to deal with her own issues, including a bad case of PTSD, must consider if the crusade has gone too far and what she could lose if she continues.

Some critics may well say Sonja is a man in woman’s clothing, a female African Rambo, and that Park is primarily interested in sex and violence – that staple of action adventure stories. They might say there is more sex than mystery, more dead bodies than live ones and also that the African women are represented by only one character, Tema, whose background is never fully explored. Park is no Fyodor Dostoevsky and his aims are to entertain and make a living as a writer while drawing as much popular attention as possible to the very real problems of the area, its people and the incredible and irreplaceable wildlife he knows and loves.

In this he succeeds magnificently. His stories are bloody and brutal. So too is southern Africa with its often harsh climate, its poverty, and the exploitation of many of its people and resources by corrupt officialdom up to and including government level. The idea that international criminals should want to exploit such conditions is hardly revolutionary.

No modern author writes of place or problems with such effortless authority or conviction. Whether Sonja and Hudson, seen fighting for their lives after a typically violent and bravura denouement, return or not, Park, who has never disappointed as a storyteller, will continue making his annual case for conservation and compassion – and at the same time leave his worldwide army of readers both gripped and richly entertained.