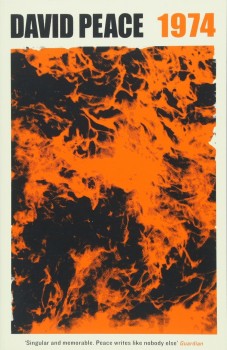 Journalist Eddie Dunford, who is investigating a missing girl, stumbles into a sordid conspiracy involving local officials and police.

Yorkshire-born David Peace, now resident in Tokyo, released his Red Riding Quartet onto the reading public in the three years up to 2002. It was controversial then, and this re-release is likely to be no less so.

The books, each covering a three-year period, present a nightmare version of Leeds as Dante’s fifth circle of hell against the background of the Glam Rock years. They are an ultra-violent dreamscape mixture of fact and fiction, portraying a decayed society riddled with prejudice, casual racism, aggression and horror, where might is always right and those who manipulate it are absolute rulers of a deprived and downtrodden population.

Crime reporter Edward Dunsford has returned to Leeds after failing to make it in the south. He’s a misogynistic, bitter drunkard, but heroic when compared to Peace’s other characters. Forever in the shadow of Crime Writer of the Year Jack Whitehead –  a point endlessly laboured ­– he is drawn into a web of corruption and violence when he investigates the disappearance and subsequent murder of a little girl. His motivation is never explored or explained. He might even care, but to say so would jar too much with the relentlessly unsympathetic tone of the book.

In a tale populated by broken men and women and the morally bankrupt men who broke them, lived-in houses where missing or dead children smile from school pictures, no-one comes off well. But by the end it’s difficult to even care about Dunford, remember the dead girls, or work out who killed them anyway.

From the minute Peace’s brutal, stunning, debut was released, it has divided opinion. His style is idiosyncratic and staccato; the book is riddled with graphic sexual fantasies, piss-streaked toilets, squalid hotel rooms, dodgy pubs and police conference rooms all telling a story of a cancerous core of corruption that taints everything it touches.

Despite the frenetic pace and visceral aura of violence which permeates a story positively dripping with bodily secretions, by halfway it is almost impossible to follow the plot. Peace’s trick of making every sentence a paragraph propels the narrative rather like a stalling engine.

Even in a narrative that is largely a nightmare, the over-use of dreams, prayers and floods of tears confuse the issue even more. Fragments of thought, conversations which start halfway through, oblique references and characters quickly introduced, then referred to by only their first names, create even more confusion.

This grossly over the top story is hardly likely to make Peace a favourite with the Yorkshire Tourist Board, that fine newspaper the Yorkshire Post or a police force so glibly accused of torture and murder – or any sensitive reader!