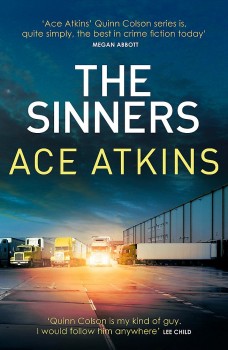 This is the eighth outing for Quinn Colson, sheriff for the rural county of Tibbehah, otherwise known as ‘the armpit of Mississippi’. Colson’s personal life has stabilised and a wedding to Maggie is imminent, involving catfish dinners, a country band and half the town, if Colson’s Elvis-lovin’ Momma gets her way.

Professional matters threaten to disrupt the marriage planning, however. The Prichard brothers, Tyler and Cody, have been producing and selling large quantities of high-quality weed, and their competitors are not happy about it. The arrival of Uncle Heath Prichard, returning after a couple of decades serving time at Parchman Farm, the state penitentiary, adds a very volatile element to the mix.

The competitors, known in some places as the Dixie Mafia, have a local representative by the name of Fannie Heathcock. Fannie operates Vienna’s Place, the former Booby Trap, a well-known titty bar, washing money for the ‘Good Ole’ Boys’ while providing liquor, drugs and girls to locals and visitors alike. Fannie is as tough as they come, but distrusted by her bosses and has to fight hard to retain a degree of autonomy.

Colson becomes involved when Ordeen Davis, a local tearaway known to be working for Fannie, turns up in a box dropped into the Big Black River. Colson’s old friend Boom, a vet who lost an arm thanks to an IED, also needs his help. Boom took a driving job with the Sutpen haulage company before finding out that some of the loads he drives are not entirely illegal. He decides he wants no part in it, but is persuaded by the FBI to stick around, despite the considerable risk.

Colson tries to keep the peace, but with all these conflicts, clashes are inevitable and there is more than one violent episode before a final shoot-out. He has a couple of new deputies to help him out; the reliable Lillie Virgil has finally decided to ditch Jericho for the better opportunities available in Memphis, but shows up to help when needed.

Atkins entirely captures the essence of a redneck backwater. The characters and the speech come across as entirely authentic and events are as believable as they are horrifying. There are good people, like Colston’s sister Caddy, who runs a charity store for the indigent and immigrants, and there are the stinkers like Skinner, always trying to make mischief and exploit the downtrodden.

Folk from the rural US are clearly different from big-city types; self-reliance arising out of necessity is clearly visible, and this makes for some great characters. At the same time, the population generally come across as having horizons extending little further than the county limits, and prey to strange beliefs. Atkins brings all this to life and the series seems to get better with every book.