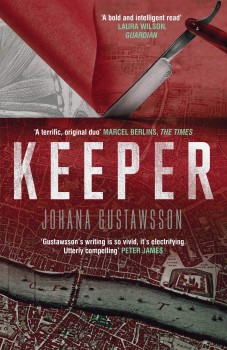 Famous actress Julianne Bell is abducted in London in circumstances that are just like murders committed ten years earlier – a case that was believed to have been solved. Then a similar murder is reported in Sweden.

Famous actress Julianne Bell is abducted outside her house in a fashionable area of London. Her trainers are left in a plastic bag under her car. This idiosyncrasy echoes the habits of the Tower Hamlets Killer, from ten years earlier, but that killer is believed to have been caught and arrested.

Even more perplexing is that the body of a woman has been found in Sweden. This body has been mutilated in exactly the same way as the bodies of the Tower Hamlets Killer’s victims. The police are perplexed and consider the possibilities of copycat killers, accomplices of the original murderer and, worse, that the wrong man was convicted ten years earlier.

An interesting cast of characters are drawn into the investigation. Alienor Lindbergh, with strongly displayed traits of being on the autistic spectrum, joins the case in Sweden to work with Kommissionär Lindbergh. Her behaviour is described with delicacy and with relevance to her style of investigation. There’s also Emily Roy, an articulate and talented profiler, and Alexis Castells, a true life crime writer, whose husband was killed by the person currently in prison who was convicted of the Tower Hamlet murders.

At intervals the story moves to Whitechapel and the times of the Jack the Ripper murders. The plot moves to Sweden, following the history of a brother and sister through a generation and more. And there’s a dark room, where the reality of imprisonment and mutilation are experienced by the latest victim.

The plot is clever. The links between the unsolved Ripper murders of the 19th century and those who were there with the modern crimes becomes increasingly apparent as the weaving of the different histories steadily converge. The oddness of the personalities of protagonists, both good and bad, mean that the reader’s sympathies do not necessarily lie where one may expect. The final denouement is very well handled and there are enough red herrings and twists throughout to make the resolution very engaging.

This book is very competently translated from the French by Maxim Jakubowski, although the French flavour of the language is retained in some of the constructions and idioms used. This has the effect of making the book hard to place, with a French style of writing for a story that moves between Sweden and UK and between Victorian and modern times. This might well be part of what gives the book its edge and its charm.

I became engrossed in the atmospheric dialogue and descriptions and found the linking of the so well-explored Jack the Ripper case to this modern, fictional case very plausible and entertaining.