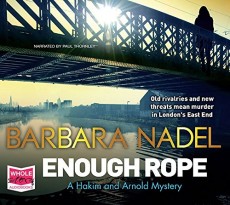 When London PI Lee Arnold is asked for help by a former police colleague he isn’t keen on getting involved, but allows himself to be persuaded to investigate a kidnapping.

It didn’t take much to get me hooked on London private investigators Lee Arnold – an ex-soldier and former copper – and his assistant Mumtaz Hakim. I first encountered them in the audiobook of Bright Shiny Things and immediately wanted to delve into their back catalogue and find out how Mumtaz became so in thrall to the vastly unpleasant Sheik family, a bunch of villains in London’s East End, so when Enough Rope came my way, I dived in with positively indecent haste.

As so often happens in crime fiction, the story has two principal strands. In the first, Lee has been roped in by an old adversary, Superintendent Paul Venus, to a strictly off-the-books investigation into the potential kidnapping of Venus’ son Harry. Venus doesn’t want his police colleagues involved and is adamant that Lee must work alone on the case. Naturally, Lee isn’t too keen, but he goes along with what Venus wants.

Meanwhile, Mumtaz has been engaged by a woman called Alison who wants to uncover the mystery of why she was left in telephone box as a baby. She was found and brought up by nuns, but now wants to find her mother and get to the truth of her abandonment.

Barbara Nadel paints a vivid picture of the End End and its Bangladeshi community. Women such as Mumtaz and her stepdaughter Shazia are under constant pressure to conform to the edicts of an increasingly radical brand of Islam that prefers women to keep themselves covered and subject to the authority of men. Shazia is harassed in public and in private for adopting Western clothes and standards, targeted particularly by the thoroughly nasty Naz Sheik. Mumtaz is still living in the shadow of an abusive marriage, even though her husband is now dead, but the Sheik family is determined to cause trouble for her, claiming that she played a part in his death.

The story of Harry Venus’ kidnapped son soon escalates, and Lee’s former police colleague (and occasional bedfellow) DI Vi Collins gets involved, much to my enjoyment. Narrator Charles Armstrong is in his element with straight-talking, fag-smoking, down-to-earth Vi, who provides comic relief without every descending into caricature. Armstrong is also great with Lee’s blunt London tones and the more complex accents and speech patterns of other characters, providing a finely-judged narration that perfectly compliments a complex and thoroughly entertaining tale of private detection inextricably mixed with police work.

Naturally, there’s some crossover with Mumtaz’s investigation, but in addition, that went off in what for me was a wholly unexpected but still believable direction, and it provided a good opportunity to showcase the work of Lee’s extremely capable assistant.

I love the characters and their portrayal, even if there were times when I did want to bang a few heads together during their more obtuse moments. The plot is complex but never impenetrable, and there are some sharp insights into the at times poisonous culture of some of the country’s supposedly elite schools. There are some very tense moments when Lee goes up against some heavy opposition and Nadel has a light touch when it comes to the inevitable reveals.