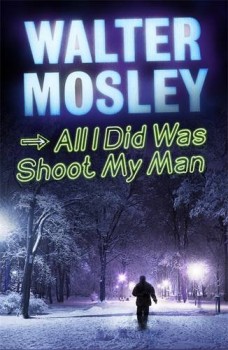 All I Did Was Shoot My Man

Private investigator Leonid McGill helped frame an innocent woman for a huge robbery at an insurance company. When he regrets his actions and decides to free her from prison, he sets in motion events which threaten her, himself and his family.

It’s not hard to see why Walter Mosley has sold more than three million books – and the latest in the series featuring the morally flexible, but ultimately decent, ex-boxer, turned criminal, turned private investigator, Leonid McGill can only swell that total.

His anti-hero PI continues the great tradition of Philip Marlowe and Sam Spade and completely exemplifies that uniquely American moral ambivalence that it doesn’t matter what you do as long as truth and justice is served in the end which persists to this day in characters such as Clint Eastwood’s brilliantly portrayed Man With No Name and the blunter and more brutal Rambo.

But McGill is far more rounded than any of these. Educated by his revolutionary Marxist father, whom he is still searching for more than 40 years after he left to fight in some South American revolution, he combines a high level of sophistication and understanding with an almost feral temperament and a bucketload of street smarts – a private eye for a new, often dangerous, but always uncertain society and century.

In his less than savoury past McGill was paid to frame a woman, already under arrest for shooting her unfaithful husband, for involvement in a huge robbery from a multi-national private insurance company. He comes to regret his actions and decides to free her from prison. That action sparks a chain of events which leads to several murders, threatens both their lives – and those of his own complicated, but intriguing family. At the same time he is trying to sort out his own enormously complicated love life and continuing his long search for the father who abandoned him.

It’s not the plot, clever though it is, which defines this unconventional PI. To pick up on McGill’s Russian forename, Dostoyevsky would not have been ashamed to have created this highly complex, yet strangely old-fashioned character. Mosley’s staccato prose borders on the elegant in places, in others razor-edged and snappy dialogue and descriptive sections bring the streets of New York to vivid life. These contrast with a clarity of thought and sheer street toughness to produce a complex and thought-provoking story.

If you’re a thriller mystery fan – or even if you’re not a lover of a genre where over-writing has produced some ghastly, but much hyped, works – and you’re only going to buy one book this year, this is the one. If you’ve not met McGill before, you’ll start off hating this amoral, hard-boiled, street smart thug – and by the end you’ll be willing him to succeed!