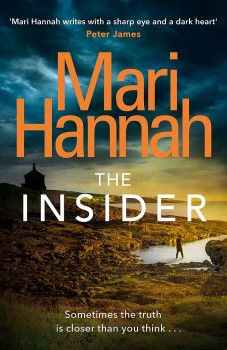 When the body of a fourth woman is found on a railway line, DCI David Stone and DS Frankie Oliver have a strong suspicion that a serial killer is at work. On top of that, someone on their team is leaking information to the press.

Three women already have been killed in Northumberland without the police even having a sniff of a suspect. When a fourth body is found on a railway line, the first question facing DCI David Stone and his truculent bag carrier DS Frankie Oliver is whether there’s a connection to the precious victims. There are some similarities in that the latest woman appears to have been strangled, but this scene is more staged than the others, so the jury is out to start with on whether the killings are linked.

What soon becomes obvious is that Stone has a loose-lipped team member on his hands, as more detail is finding its way into the public domain than should be there. Stone needs to plug the leak to retain any credibility in an operation that appears to be going nowhere. With both his bosses and the press on his back, Stone is a man under pressure.

As usual in crime fiction, the beleaguered DCI is carrying enough baggage to sink a battleship. He’s still barely coping with the trauma of a former colleague dying in his arms after a fatal stabbing. To get away from damaging associations, Stone took a drop in rank and moved back to the house left to him by his grandmother after her death, but he hasn’t been able to leave his past behind. He’s also coping with being in loco parentis to his dead brother’s 18-year-old son and hasn’t taken too well to having a teenager thrust on him, even though Ben’s situation resembles his uncle’s all to clearly, as Stone’s grandmother was the one to raise him after the death of both his parents, so at times his lack of empathy is annoying, to say the least.

Frankie Oliver also has her problems, but these take rather longer to become clear. She’s carrying the weight of expectation that comes from her father and grandfather having been well-regarded police officers and has some very large shoes to fill. This leads to tensions in the murder inquiry team that Stone rather precipitously inherited, and Frankie isn’t someone who suffers fools gladly. But that’s not all – there’s something else in Frankie’s past that is casting a large shadow over the present for her and her family.

Copious amounts of baggage aside, Mari Hannah has produced an immensely readable police procedural, redolent with detail, but never in danger of collapsing under its weight. Early on we are introduced to the mind of the killer, and it’s certainly not a spoiler when I say that of course the deaths are connected. At first, I wondered if bringing in the killer’s point of view so early was a wise move, but as the book progressed, I still found myself unable to identify who the insider of the title was, once a very obvious suspect had been ruled out.

Whilst I enjoyed Hannah’s earlier creation, DCI Kate Daniels, I must admit that Stone and Oliver have sucked me deeper into their lives and work. Oliver is spiky, verging on insubordinate, Stone is calm and methodical but not afraid to back his own gut instincts and take chances when he thinks they’re needed. They make a strong team, and The Insider cements their standing as a police duo well worth following.

This is a strong procedural that keeps plenty of surprises up its sleeve. The clues are there, but you’ll have to be on the ball to spot them, and even if you do, the knowledge won’t detract from a pacey story and some great characters.