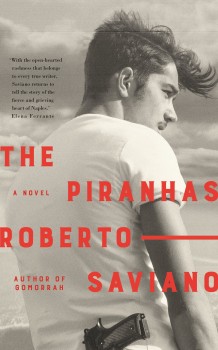 A group of teenagers from central Naples form their own paranza or mob crew, taking advantage of the vacuum left by the breakdown in the traditional Camorra.

The Forcella district of central Naples is the traditional patch of the Striano family, part of the Camorra, as the mafia is known in the region. But anti-mafia police action has had some success; boss Don Feliciano Striano has turned state’s evidence, and the old bosses are inside or under house arrest.

This leaves some space for a small group of youths, all from respectable working-class families, keen to flex their muscles. They ride their motor-scooters and play video games while dreaming of exerting real power, and they get the opportunity when offered guns by a penned-up boss who thinks a little mayhem can only be good.

The key to the translation of the group’s ideas into action is down to Nicholas Fiorillo, nicknamed Maraja, who as a student of Machiavelli knows what is required to achieve transformation of the kids into a paranza, local dialect for a mob crew. He uses the force of his personality to instil some discipline, find the weapons and select targets for their use.

With the paranza masters of the streets on their fast-moving scooters and prepared to use the guns without compunction, it is not long before traders large and small are making regular payments. The casual brutality of young guaglioni has everybody scared. As Maraja finds out, however, those who dispense violence have also to be prepared to pay a price.

This is a very powerful and convincing tale, and is a follow-up to Saviano’s Gomorrah, set in the same city. An author’s note to the Italian version explains his wish to set dialogue in authentic modern Neapolitan dialect, and in the English translation much of the speech is given in this form, with a translation immediately following. The flavour is no doubt better appreciated for those who speak Italian, but enough comes through in the English version to get a taste.

If the author’s portrait can be believed, the impact of the mafia in Naples continues to be massive, with the police ineffectual even against kids on bikes. Guns and drugs are rife, casual violence common and justice not something which your average citizen is likely to depend upon.

The paranza is a strange mixture of juvenile enthusiasms and a chilling lack of empathy for anyone outside the group and their family or close friends. They organise a firework party to cover the noise they make practising with their new firearms in the centre of the city, and spray bullets on surrounding rooftops, demolishing aerials and eviscerating a cat, before making a trip to look for human targets.

This is all hard reading, and the story becomes increasingly horrifying. It is powerful stuff, though, and Marajah’s personal story takes on Shakespearean dimensions as the book moves to a dramatic conclusion.