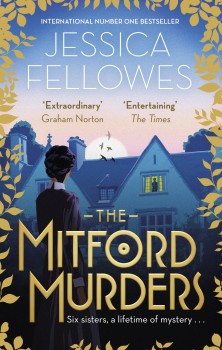 No one could accuse writer, columnist and public speaker Jessica Fellowes of lacking ambition. After her international success as author of the companion books to her uncle’s fabulously popular Downton Abbey TV series, she has taken on an even more daunting project – a series of murder mysteries based around the lives of the Mitford girls, the six daughters of the Honourable David Freeman-Mitford, later 2nd Baron Redesdale.

Fellowes plunges boldly into the period between the wars. This was the inter-war era of the Bright Young Things on the London social scene – never more stylishly represented than by the Mitford girls, each in their own way extraordinary, exciting, glamorous and even politically controversial.

What promises to be a glittering series opens with a Golden Age-style locked room, or in this case train compartment, murder mystery based on a real unsolved crime. A well-known nurse and heroine of the Boer and First World Wars, Florence Nightingale Shore, goddaughter of her famous namesake, is apparently robbed and killed in daylight in a carriage of a Victoria to Hastings train in January 1920. Travelling on the same train is Louisa Cannon, the smart, quick and ambitious daughter of a poverty stricken south London washerwoman who is trying to escape the attentions of her oppressive and dangerous uncle.

Louisa has already briefly met the wilful Nancy, eldest of the Mitford sisters, through a beautiful former schoolfriend who has married above her station. A series of chances leads to her obtaining a position in the Mitford household at Asthall Manor in the Oxfordshire countryside. Louisa and the acerbic, bright 16-year-old Nancy, already showing signs of the inquisitive, unconventional, witty author she would become, are thrown together by age in a world of younger children.

Louisa, progressively as nurserymaid, chaperone and confidante to the sisters, is the link who will anchor every book – while at the same time developing her own interests and character including a romantic interest with a short-sighted but ambitious, railway policeman.

I’m not going to ruin a cleverly constructed, inventive and ingenious plot which is a dazzling and indulgent example of a golden age mystery, where the moments of real darkness feel a bit out of place.

Some readers expecting a cosy in the style of Agatha Christie may find there is too much day-to-day detail about the Mitfords and not enough crime, but small hints of what these girls would become, cleverly woven into a story of gritty reality, friendship, trust, betrayal and love, all mixed with humour, make this a book which has almost everything you could want.Fellowes is a true storyteller with a feel for period detail.
Nancy, best remembered for her novels about upper-class life in England and France, her sharp and often provocative wit and as a writer of popular historical biographies is the ideal focus for the opening story.

Once she discovers connections between the murdered woman and her own family, there is no way the wilful and aggressively bright teenager, educated almost entirely by a series of governesses, will give up her determination to investigate the murder and solve the crime, even to the extent of temporarily ignoring the slowly approaching highlight of her young life – her coming-out ball and presentation at court!

The Mitford Murders is sparkling, frothy, clever, historically sound and believable. If this is the start of the series I can’t wait for the rest – particularly the stories featuring Unity and Diana and their obsession with Hitler and his National Socialist dream which plunged the world into the nightmare of a second war.