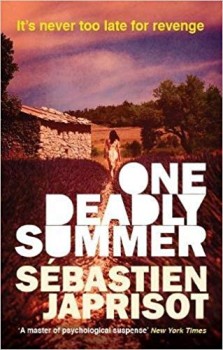 Beautiful and sensual Eliane, know as Elle, is the object of the lust of every man in a small Provencal village. When she targets car mechanic and part-time fireman Fiorimond she is planning revenge for his family’s involvement in a crime committed decades earlier.

Car mechanic and volunteer fireman Fiorimond is irresistibly drawn to beautiful, provocative, calculatingly and casually promiscuous Eliane, known as Elle, a recent arrival in his sleepy village. Their relationship develops, but even as they plan to marry, he does not know what to make of the enigma that is his bride-to-be.

In fact, the deeply troubled Elle, an unlikeable heroine, selfish and cruel, but able to exercise enormous influence over the other characters, is set on revenge on Fiorimond’s family for a crime committed decades earlier.

Jean-Baptiste Rossi – his pen-name Sebastien Japrisot is a simple anagram – who died in 2003, was an author of psychological mysteries, a screenwriter and film director and also a translator of English novels into French – introducing a baffled nation to both Hopalong Cassidy and the novels of JD Salinger!

This re-issue of possibly his finest work, first published more than 30 years ago, is a twisted tale of love, lust, obsession, revenge and murder set in the dusty villages and small towns of Provence and the Alpes Maritime in the 1970s.

This superb story, a complex, slow-burning and typically literary mystery is a true classic of French suspense. With its stylish writing, clever construction, and an unforgettable female lead, it leaves the reader guessing until the very last page.

One Deadly Summer brilliantly evokes the small village atmosphere. Japrisot’s characters are memorable and highly believable, presenting a vivid picture of rural life where people know each other’s business, and the main interest in the intolerably hot and dry summers is the Tour de France and the fires which rage in the forests of the Alpes Maritime.

Japrisot slowly seduces the reader, just as Elle seduces Fiorimond or ‘Ping-Pong’ as he is known. The narrative switches mainly between these two characters as her motives are revealed in a tale of misunderstandings, twists and fateful coincidences, signposted in the nature of a trial with sections headed as ‘Executioner’, ‘Victim’, ‘Witness’...

His characters, as always, follow a pattern – working class men prone to violence and neurotic young women who play on their sexuality. This master of the twisty thriller allows his readers to fall into the same traps as the participants. In simple, rhythmical, surprising, phonetic and lyrical language with moments of genuine tenderness and caring, he lays bare the sadness of human error and the surprises and tragedies of life.

This is a major work of real quality and originality which breaks down the barriers between literary and crime fiction and in many ways set the standard for classic ‘sexy’ French novels of the 1970s and 1980s and certainly deserves to be brought to the attention of a 21st century public.

Finally, a word for translator Alan Sheridan, author of a biography of André Gide and also translator of the works of Sartre, Foucault and Lacan. This cannot have been an easy job, with Japrisot’s frequent use of the idioms and dialect of his native south, but the sympathetic and clear rendition only enhances the authenticity of what so many years later is still a great novel.