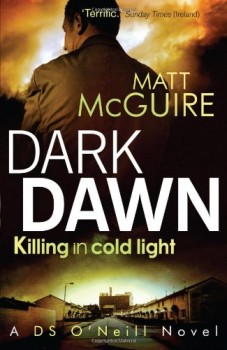 A teenager is found kneecapped and killed in a luxury development on Belfast’s River Lagan. Acting DS John O’Neill faces a wall of silence, indifference and a hostile senior officer as he enters the world of violence, drug dealing and corruption that is post-Troubles Belfast.

Matt McGuire’s impressive debut is the best piece of pure police work you are likely to come across this year. There’s nothing clever or flashy about this gripping procedural, just a scarily realistic story reflecting the problems of post-Troubles Belfast with a devastatingly honest assessment of their causes.

A teenager is found kneecapped and murdered in a luxury development on the city’s River Lagan. A paramilitary punishment? Eight years after the Good Friday Agreement this is the new, thrusting Northern Ireland, where reaping the peace benefit, exploding development and the chase for quick money have replaced the rifle and the bomb. But beneath the sheen of the new shops and clubs, the hard men of the extremes on both sides of the sectarian divide have morphed into criminal gangs, enforcing their domination of the city’s underbelly by corruption, intimidation, brutal punishments and all too frequently, murder.

In his search for who wanted the boy dead, acting DS John O’Neill faces a wall of silence, indifference and a hostile senior officer as he enters a world of violence, drug dealing and corruption, where a feral generation of youngsters, scarred by the Troubles, care for nothing but money, drugs and sex, and thumb their noses at any kind of authority.

McGuire skilfully paints a city playing catch-up and maintains this authoritative look at Belfast, warts and all, to its dramatic end. Location, characterisation and plot are word perfect and his sharp and often staccato style captures the city and its people in a none-too-flattering portrait.
John O’Neill is both credible and intriguing – an old-fashioned ‘Peeler’ who relies on hard work, intuition and a little bit of luck, but it is the supporting characters who really make this book come to life.

O’Neill’s supervising DI, one of the few survivors from the RUC after the politicians emasculated the force by turning it into the politically correct, all-inclusive Police Service of Northern Ireland, is a real copper’s copper – a breed now rapidly disappearing, buried in pschyo-babble and community initiatives. Another excellent character, the former IRA gunman, released under the amnesty and struggling to find a place in a self-serving new world that has destroyed all his old certainties, is chillingly authentic. The two teenage ‘hoods’ reflect all too well the despair and aimlessness of their lost generation. The peripheral characters are equally well drawn and enhance the story’s authenticity.

McGuire, now lecturing in Australia, has perhaps the degree of distance necessary for this forensic dissection of his native city. You may not agree with some of his judgements – particularly those on the police, although as a former crime reporter who was lucky enough to work with some fine, dedicated officers in both the mainland forces and the RUC, I find nothing but a statement of the obvious. But this fast-paced, relentless and thought-provoking novel will grab your attention and hold it throughout. This is a great debut that deserves to bring him major success and marks him as an author to watch.