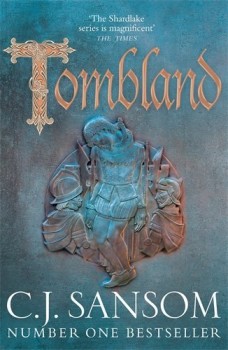 Hunchback lawyer/sleuth Matthew Shardlake is sent by Princess Elizabeth to investigate a murder of which a distant Boleyn relative is accused and finds himself unwillingly caught up in the East Anglian rising which became known as Kett’s Rebellion.

If you have the patience, before you start of the seventh of CJ Sansom’s brilliant Tudor series featuring the hunchback lawyer/sleuth Matthew Shardlake read his superb historical essay on Reimagining Kett’s Rebellion.

This fine piece of research and interpretation, which Shardlake would certainly admire, explores what little is known of the true background to this remarkable, totally immersive and vividly written story which sprawls over more than 850 pages.

In the summer of 1549, two years after the death of Henry VIII, England is in chaos. His son, the nominal Edward VI, is 11, with his uncle Edward Seymour, Duke of Somerset, a vain, ambitious man who seeks to be all things to all people, ruling as Protector. Radical Protestants are stirring discontent as they attempt to stamp out all traces of Catholicism, while the Protector’s ill-judged, ill-conducted and prolonged war with Scotland threatens to escalate by dragging the French into the conflict.

The economy is in collapse, inflation rages, the coinage is debased and rebellion is stirring among the jobless and starving peasantry as rich or aristocratic landlords seek to increase their wealth and power, enclosing common land to graze sheep, as England’s biggest export and earner is wool from sheep.

Shardlake has been working for Henry’s younger daughter, Elizabeth. The gruesome and bizarre murder of the wife of John Boleyn – a distant Norfolk relation of Elizabeth’s mother, Henry’s second wife Anne Boleyn – could have political implications for the teenage girl, virtually a prisoner in Hatfield Palace and the subject of enmity of her half-sister Mary, the Catholic second in line to the throne.

Under orders from Elizabeth, Shardlake and his assistant Nicholas Overton attend the summer assizes at Norwich, England’s second city, where John Boleyn is to stand trial. Reunited with Shardlake’s former assistant Jack Barak, they uncover layers of mystery surrounding the woman’s death with the murders of possible key witnesses.

As peasant rebellion breaks out across the country, local yeoman Robert Kett leads a force of thousands, overthrowing the landlords, taking over the city and establishing a vast camp outside Norwich. As Barak throws in his lot with the rebels, Nicholas opposes them and becomes a prisoner. Shardlake, struggling to decide where his loyalties lie, becomes an unwilling ally of the charismatic Kett, as government forces prepare to destroy the rebels.

The book has a huge cast, adroitly managed, and effortlessly weaves together the realities of life in Tudor England, an absorbing murder mystery, vivid characters and seductive history to provide compelling reading for both history lovers and crime aficionados.

Sansom, brings the past to life in three dimensions, but it is the character of his main protagonist that shines throughout this remarkable series. Shardlake, a mild-mannered, middle-aged, hunchback represents everything you would want to find in a man of the law.
His character has developed along with his personal relationships with others. Whether it is dealing with a former servant, nobility, rebels in Kett’s camp or his friends, each book sees him develop his inclusive humanity, his moral balance and powers of persuasion tempered by a sharp intelligence.

There is no black and white in this tale of divided loyalties and tension building towards a grim but inevitable conclusion. Shardlake is caught in a situation out of his control and the reader is a fascinated and at times horrified spectator as he tries to cope with – and survive – the evolving drama.

This is possibly the best of the series so far. Despite its length, there’s not a wasted word as Sansom explores the impact of the state of the country on ordinary men and women, the rich and the poor, the fortunate and unlucky, all set against a physical background that captures mid-16th century Norwich and brings it to life on the page.