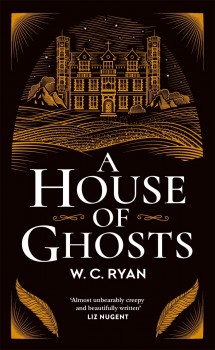 A House of Ghosts

Kate Cartwright, a woman with special gifts, is invited by armaments millionaire Lord Francis Highmount and his wife to join a party on their isolated island to take part in a seance to contact their sons killed in World War I. As the guests arrive, it becomes clear each has something to hide – and soon one will be savagely murdered.

If you’re a cynic like me, you might wonder why the publisher chose to issue this eerie story just before Halloween, stressing its creepy and ingenious paranormal roots. This gravely under-sells Ryan, author of the World War II story The Constant Soldier and also the Korolev historical crime series.

For while the paranormal dominates this clever story, Ryan has managed to offer something for everyone, crossing genres to meld counter-intelligence and treason with mental instability, PTSD, moral questions with murder, a love story with violent action.

In the winter of 1917, the First World War is entering its key and most brutal phase. In England, as losses mount, many seek answers to the darkness now in their lives. Kate Cartwright is a woman with special gifts and an ability to ‘see’ ghosts. She works in the Navy’s code-breaking section. Her brother Arthur has been reported missing in action. She is also the current guardian of a family heirloom, the FitzAubrey Mirror, which can reveal the secrets of both past and future to the women of the family.

She has been invited to the isolated Blackwater Island off the Devon coast, where millionaire armaments manufacturer Lord Francis Highmount and his Austrian wife have arranged a spiritualist gathering to contact their two sons lost in the conflict.

Kate is summoned to the offices of Captain Mansfield George Smith-Cumming, the first director of what would become the Secret Intelligence Service (MI6), where she meets the mysterious – and annoying – Captain Robert Donovan, who is posing as the batman to her former Army officer fiancé in a bid to expose a traitor and his handlers.

As the guests arrive, Kate’s titled parents, two ‘professional’ clairvoyants and an Army doctor and his patient, a private soldier suffering from severe PTSD after being trapped in a tunnel he was digging under German lines, it becomes clear each has something to hide. When a storm traps them on an island full of secret tunnels and haunted by its past, the scene for a classic whodunit is set and attacks, sabotage and murder follow.

The supernatural elements are not the central focus of the story, but do lend an almost Gothic atmosphere to what is otherwise quite a simple tale with a plethora of minor characters offering a series of distractions.

It is almost Christie-like with its remote islands, aristocrats, an ancient haunted country house, and, of course, the guests. While there is little doubt in the mind of any experienced reader from early on as to the identity of the traitor or spymaster, there is plenty of tension and suspense as Kate and Donovan follow the leads.

But this beautifully written and ingenious period piece combines history, crime and an entertainingly spiky romance, all in an eerily evocative setting. Spooks, spies, seances, things that go bump in the night – Ryan has it all in this tremendously enjoyable take on the haunted house mystery.