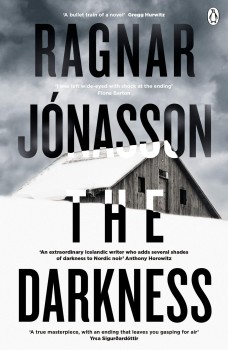 As 64-year-old Detective Inspector Hulda Hermannsdottir of the Reykjavik police is forced into early yet unwelcome retirement, she can work on one cold case of her choice. Hulda takes on the apparent suicide of a Russian asylum seeker Elena. But she's ignored by her colleagues and plagued by painful memories and seems to be heading into real danger.

The Darkness (Dimma), translated by Victoria Cribb, starts a new series of novels by Ragnar Jónasson who introduces a heroine rarely seen playing the main part in the male-dominated world of lone wolves – an older woman.
Detective Inspector Hulda Hermannsdottir of the Reykjavik police is 64 and isn’t looking forward to retirement. Although a keen mountain walker, she has no other interests and dreads the loneliness and reoccurring painful memories of her dark past which never fade. As she approaches her old age the fear of losing a focus point which is the routine associated with her job intensifies. She tentatively considers getting closer to Petur, a fellow walker, but at the same time worries that it’s too late for friendship, never mind a relationship.
Uneventful private life aside, Hulda’s professional realm isn’t a barrel of laughs either. After failing to fit within the boys’ tight-knit group mentality, she represents a classic example of a decent detective never being able to reach the heights. Then the unexpected happens and she’s forced to retire much earlier than planned as her boss has other plans: basically he wants to employ a young male hot-shot. But he graciously gives her two weeks to solve a single cold case of her choice.
Without hesitation Hulda decides to take on the case of the young Russian woman whose body was found on the Icelandic shore a year earlier. Elena was an asylum seeker and the police investigation seemed rudimentary, declaring her death a suicide. Hulda, however, is determined to find out what had really happened to Elena as it becomes obvious that the woman was allowed to remain in Iceland.
Hulda starts with visiting the hostel for asylum seekers where Elena had stayed, talks to her lawyer, meets the interpreter, and discovers that another woman vanished around the same time. She very soon realises that her colleagues in the police have no interest in re-opening the case. Moreover, by ignoring her they keep her so much in the dark that Hulda inadvertently compromises another ongoing investigation into a prostitution ring.
She's torn between personal fears, feelings of rejection and determination but keeps going, makes important discoveries as well as mistakes, and forgets about own safety, while constantly trying to evaluate her own life. In the bitter cold that seems so real the beauty of the landscape becomes a forbidding territory, hiding even more secrets, as a new thread appears: commentary on the dangerous trip into the snowy glaciers. Yet no one is aware of who is describing the unsettling moments leading to another death.
The Darkness isn’t about big bangs and fireworks but the mundane daily struggle, with its bleakness and quiet despair. The author of the Dark Iceland series featuring the young detective Ari Thór Arason now turns his hand to creating a conflicted woman at the end of her career, full of regrets which come to the surface as the story develops.
When the awful secrets of her life are eventually exposed, Jónasson uses this to allow readers a better understanding of Hulda’s questionable choices and actions, as some of them amount to truly reckless professional behaviour such as protecting a mother who had tried to kill a paedophile. The title then makes perfect sense. But as a non-judgmental observer he also provides a totally unexpected shocking finale to the book, a finale which will no doubt be more explored in the next instalment.