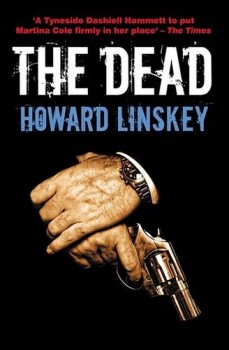 Gang boss David Blake is back on top until the arrest of his accountant for child murder sparks a chain of events which put Blake’s empire – and life – at risk.

Gang boss David Blake is back in his native city and though he still rules the Newcastle underworld his dominance is becoming difficult to maintain as he is challenged by brutal Slavic rivals. And his private life is no less complicated. When a policeman’s daughter in killed and the grieving father claims Blake was responsible, it sparks a chain of events which threaten both his freedom – and possibly his life and that of his girlfriend and daughter.

Despite the publishers’ attempt to sanitise Blake as a ‘white collar gangster’ and Howard Linskey’s clever attempt to make him somehow sympathetic through first person narration and an occasional lapse into what might almost be conscience, this is a book about a totally amoral, vicious and violent man. Blake is a killer, a drug runner on a huge scale, a whoremonger, a torturer and a corrupter. Merely giving him a sometimes attractive and complex character does not alter the basics – it reminds me of Violet Kray insisting her sons Ronnie and Reggie were good boys.

The plot is stretched so thin as to be on the far shores of belief. Northumbria police are either incompetent or corrupt.There are the compulsory Eastern European bandits to introduce even more fairly unnecessary brutality, plus a mad Russian oligarch. And the action climaxes with a Russian special forces unit on a cross-border raid into Finland.

In some ways the book is particularly dated. Women play a small part, as you would expect in a gangster story, but those who do appear are stereotyped as sluts or saints – and all are in some way portrayed as victims.

It’s not all bad. The supporting characters, virtually all of varying degrees of unpleasantness, are on the whole well-drawn, and the Geordie atmosphere and dialogue in the Newcastle scenes are authentic. The story races along at a cracking pace and the writing is almost cinematic, giving it a vivid and visual feel. It is hardly surprising to learn that the first in the series, The Drop, has already been optioned for TV. In fact, the overall impression is of a script for a particularly violent late night thriller or a brutal video game.