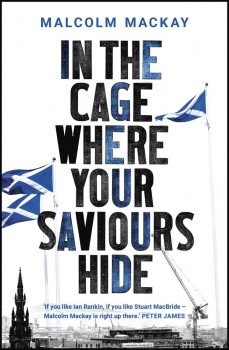 In the Cage Where Your Saviours Hide

Young and naive private investigator Darian Ross is dragged into a world where no one can be trusted when he investigates the killing of a money launderer for his former partner, the fascinating Maeve Campbell.

What a strange book! Stornaway born and bred Malcolm Mackay was hailed as the new face of Scottish noir and shortlisted for international prizes, including the Edgar’s Best Paperback Original and the CWA John Creasey New Blood Dagger, for his brilliant and brutal Glasgow trilogy.

But this fanciful alternative Scottish history which forms the background to a private eye investigation involving police corruption and big business money laundering, bears all the signs of a frustrated nationalist who might have been at the country’s most notable export!

I found his world, in which the independent and ancient kingdom of Scotland with its exploited Central American colonies of Caledonia, and which was almost unaffected by the 2008 crash, so unbelievable as to be almost impossible to concentrate on.

History tells me the so-called Darien Scheme of the late 1690s crippled the country, destroying a fifth of its total wealth, killed all but a handful of the 2,500 settlers and necessitated a huge English grant to stabilise the country; that more Scottish kings were murdered than died in their beds before James VI had the sense to become James I of England; and that mainly English taxpayers had to cough up £45 billion to bail out the Royal Bank of Scotland after its ill-judged takeover of ABN Amro in 2007!

Which is all a great shame, because if you can get over this ludicrous wishful thinking, there’s a dark, clever and compelling story buried beneath it! If it’s all meant to be allegorical, I, as I suspect most other readers will, fail to see how.

In Mackay’s world, the great trading port of Challaid in the north west of the country once sent its ships around the world and its merchants and bankers grew rich exploiting their Central America empire.

Times have changed. The docks are almost silent, ambitious infrastructure projects, like underground railway tunnels, have collapsed. Above ground all that survives of its glorious past are networks of power and corruption stretching from the streets to the government.

Young and painfully naive private investigator Darian Ross, whose ex-policeman father is in prison for corruption and murder and whose elder brother runs his own criminal gang, becomes involved in a case brought to the office he shares with a failed detective by the charismatic Maeve Campbell.
He becomes fascinated by a femme fatale who rivals anything in Chandler’s great Philip Marlowe books, but is also drawn by his innate sense of justice into wondering why the police are apparently uninterested in investigating the murder of her former partner, stabbed over his laundering of money for many of the city’s minor criminals.

Through a series of dead ends, threats, violence and bent coppers Ross is plunged into a world in which no one can be trusted. Although it’s a good enough read, with some compelling descriptions of the destitution, crime and poverty which still blights parts of so many Scottish towns, once you get past the incongruity of the setting, the story lacks both the tautness and blackness of his previous books – and if you’re expecting anything like the gripping, dark and violent How A Gunman Says Goodbye this is something of a disappointment.