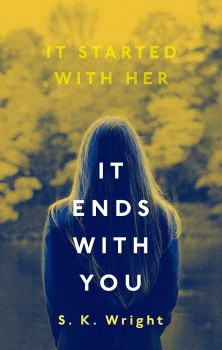 It Ends With You

When a murdered girl is found in woodland, suspicion immediately falls on her boyfriend. The police think they’ve got the killer, but others aren’t so sure.

Eva Pieachowski is the golden girl at St Martin’s High School. She’s talented, popular with other pupils and with teachers. When she disappears, everyone turns out to search for her, hoping for the best but fearing the worst. When she’s found stabbed to death in a muddy pit in the local wood, suspicion immediately falls on Luke Jones, her boyfriend.

It Ends With You is a darkly clever teen murder mystery, told from multiple points of view, using the power of social media to break up the narrative strands with extracts from the Big Bad Blog, which has the knack of saying what everyone is thinking, and bringing suspicions out into the open. Eva’s own diary has a part to play, too, as do WhatsApp messages, all of which contribute to a rapidly-shifting story that succeeds in undermining everything you’ve come to believe and trust. Unreliable narrators are usually a hard sell for me, but SK Wright pulls off a difficult trick with apparent ease.

Suspects line up and get knocked down like ninepins, then bounce back up again, just when you think you’ve got a handle on the plot. I enjoyed Luke’s relationship with Rob Pennington, who gets his time in the limelight as everyone does, trying to convince the police that he and Luke were friends, despite their public – and private – scraps.

The febrile school setting works well, with no one knowing quite who can be trusted, and suspicion even turns in the direction of popular teacher Mr Abdul. Carolina, the daughter of DI Jackson, assigned as lead officer to the murder hunt, takes a hand and does some sleuthing worthy of the Scooby Gang in her hunt for a blonde girl seen with the search party the night Eva’s body was found.

The short chapters drive the story along at a fast pace as events build to some tense courtroom scenes towards the end, with allegiances shifting as fast as the tide, and ebbing and flowing as each different narrator lines up to give their slant on events and the people involved. The book is strong on teen friendships but isn’t afraid to shine a spotlight on the pressures ramped up by the constant scrutiny of platforms like Facebook, where life is measured in likes.

Wright gives her various narrators strong and individual voices, making it easy to follow events as they unfold, even though the underlying story is anything but simple. Wright plays fair with her readers, and the ending manages to shock even though the clues were there, albeit buried. This is quality teen fiction.