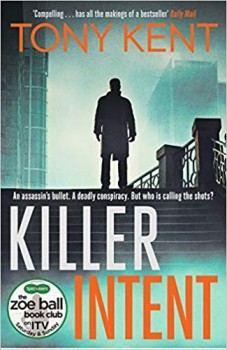 What appears a failed assassination attempt on the American president during a visit to London leads three strangers into a world of political conspiracy, violence and murder.

London-Irishman Tony Wyatt, writing under the assumed surname of his comic-book hero Clark Kent, announces his arrival on the action thriller scene in spectacular style. With touches of Frederick Forsyth and Jack Higgins and the political mastery of Michael Dobbs, this former international amateur boxer and successful criminal barrister steps into the ring with a knock-out debut which won selection for the Zoe Ball Book Club.

Mainland Britain is under increasing threat from Irish terrorist violence, but this time it’s from both sides of the divide. A new manifestation of the IRA and another Protestant terror gang are bombing indiscriminately.

A weak and indecisive prime minister has made unpopular concessions in a bid to halt the slaughter. His government is divided, with a senior minister pressing for stronger action, backed by a charismatic back bencher and others in the party.

Into this uncertain atmosphere steps the current American president and his predecessor, in London for a ceremony to remember Anglo-American actions in recent Middle Eastern wars. An attempted assassination in which a British minister dies sparks a chain reaction of explosive events with UK security forces seemingly powerless to stop the chaos threatening to overwhelm the government.

Three strangers, SAS Major Joe Dempsey, now an intelligence officer with the small and shady Department of Domestic Security; Sarah Truman, a young CNN reporter determined to make her way in the industry; and Belfast-born criminal barrister Michael Devlin, who has disowned his secret past, are thrown together by events. As a dark conspiracy unfolds, the number of those they can trust grows ever smaller and they are forced to work in the shadows, caught in a life-or-death race against the clock, with the threat of a professional killer stalking them all.

Wyatt uses his unique insight into the criminal world, a high-level knowledge of the intensity and power of hand-to-hand fighting, and the story-telling skills of a born raconteur. And he makes his story race along – and given the current world political situation it has moments where it is difficult to distinguish fiction from fact.

Certainly the political side offers easy comparisons to household faces from the recent past and present and Wyatt’s gangsters all appear to have just stepped out of the Old Bailey dock!
As a mystery, it’s not much. Any competent armchair detective will be able to sort out the villains quite early on. But the plot’s terse pace, action and tension, together with its thought-provoking topicality, make it an enthralling read right through to its inevitable and bloody denouement.

There are errors which should have been picked up. British officers do not salute when in plain clothes, and the suggestion that a character introduced as a sergeant major should then be called a sergeant is near sacrilege!

Those minor points should not detract from readers’ enjoyment of this action/conspiracy thriller, which bodes well for a promised series featuring some of Wyatt’s principals.