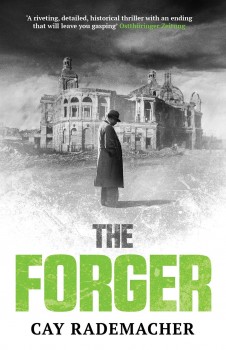 Chief Inspector Frank Stave has decided to transfer from the homicide section of Hamburg CID to Department S which deals with economic crime, mainly the black market. Even he’s not sure why he wants to move.

The Forger opens with Chief Inspector Frank Stave in hospital recovering from having been shot whilst trying to arrest a murderer. He is very anxious to get back to work but – for reasons that are not altogether clear, even to him – he has decided that he no longer wants to be part of Hamburg's homicide department. Accordingly, he puts in a request to be transferred to Department S which is mainly concerned with trying to locate and arrest black marketeers.

The first case to which he is assigned is a little unusual and has been given to Department S because nobody else has expressed any interest in it. It involves artworks hidden in the ruins of the bombed Reimershof, which, when it still existed as a building, was a block of offices. The Trummerfrauen, women who work on clearing the rubble, had found the head of a woman, cast in bronze, and other broken artwork. Nor was that all they had found.

Stave finds that a former colleague in Homicide, Chief Inspector Donnecke, has also been called in because also partly hidden in the ruins was the body of a man.  Whilst Stave is no longer in Homicide and is not strictly concerned with the corpse, he finds himself trying to identify it as well as the artwork. He is aware that this is beyond his remit, but old habits die hard, particularly when the two may be connected. He has to be careful, however, to ensure that Donnecke – an old enemy of his – doesn't find out what he is doing.

The remainder of the novel is concerned with the detailed investigation that he carries out.  It involves interviewing artists who were working before the war during the outlawing by the Nazis of what was known as 'degenerate art'. In addition, he gains considerable information about the artefacts from a wealthy collector. We are constantly made aware that Stave, though involved in cases of black marketeering, sees it as his duty to identify the corpse, particularly when he learns that Donnecke has no intention of doing anything and simply wants to close the file.

Whilst this is classified as a crime novel, it is by no means clear where the crime is, or if there is one at all. Nevertheless, the author manages to sustain interest in the investigation from first to last.

This is partly achieved by the authenticity of the setting. As in the previous two novels featuring Stave, The Murderer in Ruins and The Wolf Children, the historical setting is used to make a telling contribution to the story being told. We are shown a city in which modern amenities – lighting and road transport in particular – are barely being retained. At those hours when work begins and ends the streets are full of people who have no other way to get there except to walk.

The devastation caused by bombing still remains three years after the war and clearing it is a full-time occupation. Food is, of course, rationed and most meals are monotonous, allowing for little variation in the diet. As always, when life for the ordinary people is hard, there are always those – in this situation the black marketeers – seeking to make a profit. The practice is so widespread that the authorities have despaired of ever being able to put an end to it. All of this the author manages to convey without its being in any way a history lesson. He takes the historical setting, thinks what it might have meant to the people living in the city at the time and constructs a plot that is absorbing and utterly convincing.