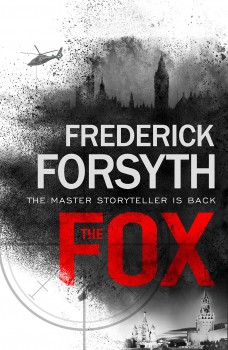 A retired Cold Warrior uses the unique skills of a 17-year-old computer hacker with Asperger’s Syndrome to change the balance of world power.

The man who wrote the rulebook for modern thriller writers has put the cover on his ancient typewriter for the final time. This long-awaited finale – The Kill List (2013) was meant to be his last novel – and his 2015 memoir The Outsider supposed to write finis to a career which has taken in more than a dozen worldwide best sellers and 70 million plus sales – will be welcomed by fans of the ‘faction’ style he pioneered and all lovers of superbly written action adventure.

Advancing age, which hampered his extensive and sometimes dangerous background research, has finally forced ex-RAF pilot, investigative journalist and sometime MI6 spy Frederick Forysth into retirement. Then the master story teller read of British systems hackers Gary McKinnon and Lauri Love; Richard Pryce, the 16-year-old D grader in A-level computer science who, using the codename Datastream Cowboy and a £750 computer, infiltrated top US security establishments from his north London bedroom; and  the 15-year-old American, known only by his screen name of cOmrade, who brought parts of the US military to a halt.

The result? Forsyth’s 18th major novel centred on a 17-year-old schoolboy with Asperger’s Syndrome, whose unmatched thought processes allow him to penetrate intricate firewalls to access the most jealously guarded secrets at the highest governmental level anywhere in the world. His inexplicable skills bring him to the attention of Sir Adrian Weston, retired Cold Warrior and former deputy head of MI6, a master of deception, currently an unofficial security adviser to Britain’s female prime minister.

Weston sees the chance to strike back in the increasingly vicious cyber war being waged on his country by a Russian president obsessed with restoring his nation’s former position as a great superpower. The rest follows on from there, told in Forsyth’s usual spellbinding style – today’s headlines stretched into what might reasonably be tomorrow’s – as Weston uses this remarkable teenager to change the balance of world power and the lengths to which he must go to protect his unique ‘asset’.

This is Forsyth at his best, using his highly detailed insider knowledge of governmental and military structures of both the UK, the US and other major players on the global political scene. Much of the plot involves governments and regimes in Russia, North Korea, Iran and China.

In the main it is completely believable as are the characters in his somewhat old-fashioned world of the old spies clubs and secret networking – although for all our sakes we must believe the real Westons of this world by now know who to trust!

Forsyth cleverly avoids naming the three major world leaders involved by giving them only nicknames, but the British PM – who has many of Margaret Thatcher’s characteristics in Theresa May’s kitten heels – Donald Trump and Vladimir Putin are so cleverly portrayed as to be totally obvious.

There are a couple of minor weaknesses. The involvement of a Scottish ex-soldier ghillie with the tracking skills of Daniel Boone is just too convenient, and the love story between two of the minor characters, seemingly inserted to ‘soften’ what is otherwise a totally masculine story, feels somewhat awkward.

Forsyth has always been to the right of the political spectrum and his opinions, which time may well prove to be justified, have not changed. Apart from cyber war, this story is all about the power of deception – and his scorn for the ability of well-meaning western governments to self-deception when it suits their leaders’ image, public positioning and politics

But, as usual, it’s brilliant. Forsyth has been at the pinnacle of thriller writing since Day of The Jackal hit the shelves in 1971 – and if he rewrote the London telephone book he could turn it into a best seller. As you would expect, he’s gone out on a high!