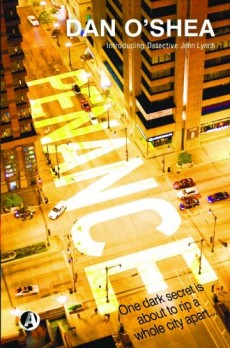 When an elderly woman is shot dead by a sniper after leaving the confessional, Chicago detective John Lynch is assigned to investigate and enters a murky world of political ambition and double cross.

Fans of Jason Bourne will love this high-paced, high-tech mixture of procedural, political whodunnit and black ops tale as Dan O’Shea bursts onto the crime scene with this ambitious and tautly written tale of two generations of Chicago life. It’s got everything – enough bloody action, enough double crosses and plot twists to baffle, enough hot sex and enough reality to remind you it is set in a city which under its Irish-American Democratic mayor Richard Joseph Daly became a byword for corruption during his 21 years in office until his death in 1976.

O’Shea’s theme of the way corruption can infect a city – and far beyond – and his insider’s portrayal of the Southside Irish community form a solid base for this dense and twisted plot and a natural bridge for a dual storyline which covers events in 1971 and the present day. Some characters bridge the gap, others with the same surnames provide a necessary continuity.

An elderly woman leaving confession is shot through the heart at extreme range by a highly skilled sniper who has gone rogue from a deep black ops government agency and Detective John Lynch is assigned to the case. The woman’s son is a high-powered and amoral businessman with connections in high places.

Flashbacks to 1971 involve the death of the Mayor’s son in highly compromising circumstances and the killing of Lynch’s father, the detective assigned to that case. As Lynch starts to build his own case, the black ops operatives try to stop what could turn into a more than embarrassing national incident – and the links to the events of four decades before become clearer.

The character of Lynch – whose professional American football career was halted by injury – and his investigation are a rock-solid base for the story. O’Shea gives him enough space to develop into a believable and sympathetic character and the details of his father’s part in the past events, his relationship with his terminally ill mother and a budding romance with a sparky newspaper reporter keep the human interest high while the frantic action unfolds.

This is a big and ambitious story. The characters are sometimes sketchy – if O'Shea fleshed them all out this would be War and Peace, Chicago style. But his dexterity with his writing and the sheer energy of the dialogue moves a complex plot along at a breakneck pace towards a blood-soaked conclusion, then he finds one more twist up his sleeve. Penance is clever, exciting and a great read that you won’t put down