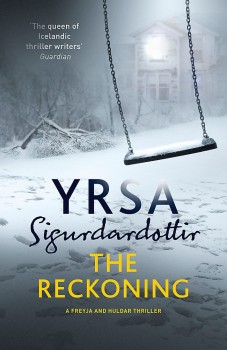 A chilling message found in a school’s time capsule says that six people will be killed. The threat has been written ten years ago. Disgraced detective Huldar is assigned to investigate this seemingly non-case.

A Reykjavik school’s innocent time capsule buried for ten years turns into a Pandora’s box when a sinister message from one of the pupils is discovered. It contains a threat of deaths to come, written by a 13-year-old wrote, predicting that six people will die, and nobody will miss them.
When alerted to the message the police don’t take it seriously but for the sake of appearances detective Huldar is assigned to deal with the non-case. Following recent events (chillingly explored in The Legacy) Huldar dropped to the bottom of the pecking order, not really bothered about it, but keen to get his teeth into something worth pursuing. Especially as he sees an opportunity to contact the Children’s House psychologist Freya, also disgraced and demoted.
The tentative searches reveal the author of the note is Thröstur, a hostile and desperately angry young man, living, or rather barely existing, with his sister Sigrún and mother Agnes. Further probing exposes the horrific past of this small, deeply unhappy and damaged family. Father Jón Jónsson was charged with raping and murdering eight-year-old Vaka, and now after ten years in prison, he’s released early.
Also, judging by the comments from the school’s headteacher and vague evidence that years ago social services were involved in assessing Thröstur, Huldar becomes convinced that abuse must have been inflicted on all of them, and a tattoo on the man’s hands indicates a desire for revenge.
As he tries to piece together bits of information, searching for missing reports and trying to win over his overbearing female boss Erla, he also struggles with his growing feelings for Freya. The situation does not make things easier for either of them, as the psychologist is both furious with him for her professional downfall and attracted to his rogue charm and the possibility of getting out of the job rut.
As the duo work on the edge of the more important cases, the woman-in-charge Erla must deal with extra complicated issues: a pair of sawn-off hands were found in a retired prosecutor’s garden, sending shock waves across the police station, then a body tied to an accountant’s car. Someone is out there ticking off the names, or rather initials, on the list, and must be stopped before more people are killed.
Add to this worrying mixture a story from a distressed mother whose small children were lured by a Farther Christmas to see puppies, a desperately pained and grieving Vaka’s mother being hysterical at the station, a stuck-up prosecutor receiving threatening emails, a dug-up coffin ending up on the rubbish heap, and eventually Thröstur becomes the main suspect in the bizarre horrific murders. Although Huldar attempts to understand him, he also cannot see any other culprit with a strong enough motive.
Yrsa Sigurðardóttir’s incredible gift of mixing the macabre and the poignant, together with the astute observations of the ordinary life, sprinkled with a dark sense of humour, keeps on giving in buckets. Her imagination knows no bounds, turning the most ordinary objects into deadly weapons. The descriptions of methods and results of killings are not for those who are easily shocked. On the other hand, some of what’s been happening to the perpetrators of injustice seems insignificant compared to the effects of the years of abuse.
The nuanced writing encompasses the thriller’s overwhelming sense of doom as it explores the failings of the society to protect victims or offer them adequate help when dealing with the aftermath. This is an excellent story as always expertly translated by Victoria Cribb.