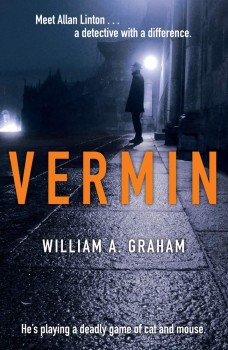 by William A. Graham

When Scottish PI Allan Linton is hired to find a missing young woman he finds himself in a world of gangsters, people traffickers and murder.

This taut debut showcases a new voice in Scottish crime fiction – and offers an interesting comparison as well as a tribute to one of the great American writers. William A Graham was born and raised in Dundee where he worked for the giant newspaper and comic publishing house DC Thomson for more than 30 years, mostly editing children’s comics. As an avid reader of American crime novels, there was probably only one kind of book he was destined to write – and he succeeds brilliantly in slightly modifying the prolific Mickey Spillane for a Scottish setting.

The comparisons are obvious. Spillane, an established comic-book writer, introduced hardman PI Mike Danger as a strip in 1946. Unable to sell the project, he reworked the story the following year, rebranding his hero as Mike Hammer in his first novel I, The Jury. More than a dozen massive hits followed – and Hammer is kept alive today by Spillane’s literary executor Max Allan Collins. As well as the books, Hammer has featured in films, TV shows and audio books.

Allan Linton of Linton & Associates, Inquiry Agents, is no Hammer. There’s no .45 Colt M1911A1 in a shoulder harness under his left arm and he is pretty much averse to violent fisticuffs. But this almost accidental PI, a former crime reporter who traded his job for the uncertainties of being a gumshoe rather than become a ‘news gatherer’ as the business of journalism is gradually neutered, shares at least some of the cynicism, the humour – and the beautiful women – of his more famous progenitor.

When an expensively dressed, well-spoken Englishman walks into Linton’s shabby Dundee office, Allan is persuaded to take on a missing persons case by the sheer size of the fee. The only clue is a picture of a young woman in school uniform – and a name, Tina Lamont, probably assumed, plus a suggestion that she originates from Dundee.

As Allan and the mysterious Niddrie, his only associate partner – ex-army and with unarmed combat and other skills which don’t quite match his claim to serving in the Pay Corps – begin to investigate they can find no trace of the girl. Gradually Linton’s contacts on both sides of the law, people he has helped or befriended in the past including the city’s major drug dealer, produce promising leads.

Then the body of a well-known judge is found in London and it becomes clear the partners are not the only ones on Tina’s trail. The involvement of major London criminals ratchets up the hunt to a deeply worrying level and a spectacular conclusion.

If this is the beginning of what looks like it could be an entertaining series Linton has a great personality to carry it. Almost seamlessly, flashbacks develop the relationship between characters and provide emotional ties.

Linton’s stories covering his failed marriage, his precocious teenage daughter, his love of 1960s music inherited from his father, and former clients, build a picture of a balanced character at ease with himself and others. A good plot, some unexpected twists and plenty of humour, particularly in his relationship with the constantly surprising Niddrie, will keep your attention throughout and Linton’s mostly upbeat approach to life is entertaining.

From an opening which will certainly grab your attention, featuring an MP with a flatulence problem as well as other nasty habits, the pace is quite relentless with even the flashbacks building seamlessly into a current part of the story, A strong main plot, a couple of subplots, believable characters, drama, action, crime and the strong vein of humour throughout, make this a worthy, if rather less bloody addition to the Spillane heritage.