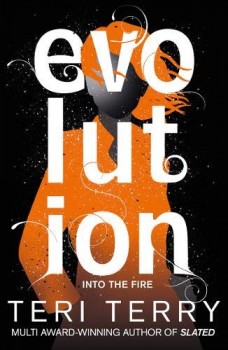 Shay is searching for the truth about the deadly virus that has swept through the country. She believes the answers are to be found in Multiverse, an isolated community of survivors.

Evolution is the concluding part of Teri Terry’s endlessly fascinating Dark Matter series and was preceded by Contagion and Deception. A deadly virus has swept through the country, leaving millions dead. A very small number of people are immune, and an even smaller number of people catch the virus and survive. Those who do pull through the mystery illness are left with inexplicable powers. They can communicate, heal and even kill, all by using their minds.

Sixteen-year-old Shay is one such survivor. Her quest to find the source of the virus has led her to the enigmatic Alex Cross – known as Xander – the revered leader of a small community of survivors on a Scottish island. But isolation is not always the defence it seems, and it’s not long before danger threatens Multiverse and its inhabitants.

Teri Terry presents a bleak post-apocalyptic world in which survivors of the virus are hunted down and ruthlessly killed. The country has descended into warring bands fighting for their existence, not knowing when and where the contagion will strike next. As well as searching for answers, Shay is also looking for her younger sister Callie, who has been at the heart of this series since it began. And searching for both Shay and Callie is Kai, the boy Shay has become close to.

Multiverse holds the answers, but the charismatic, ruthless Xander is determined to keep its secrets. Terry tells the story from multiple viewpoints, each narrated by a different character, and she does a good job of imbuing her narrators with their own voices, which is always a difficult trick to pull off.

Evolution isn’t a good point to start this series. Terry does her best to bring new readers up to speed with the background, but without a knowledge of the earlier books, following some of the subtler plot strands would be hard, especially after the dramatic events at the close of Deception. This is a series that’s worth taking the time to follow from the beginning. There were aspects of the plot I found hard to swallow, particularly towards the end, but that did not detract from a strong YA series, peopled with vivid characters and driven by an equally strong premise