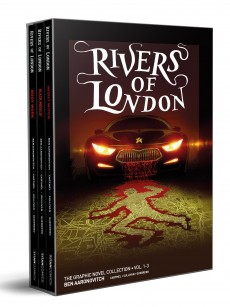 A boxed set of three graphic novels in the Rivers of London series featuring PC Peter Grant and the ‘weird shit’ that keeps him in a job.

Ben Aaronovitch’s phenomenal Rivers of London series leaps vividly to life on the page in this boxed set of three graphic novels published by Titan Comics. I’ve followed the always entertaining mix of down to earth police procedural and lively urban fantasy, set against the solid backdrop of London, which in Aaronovitch's skilled counts as a character in its own right. Here he teams up with author Andrew Cartmel and illustrators Lee Sullivan, Louis Guerrero, Robin Steen to bring the series fully to life on the page.

In the first of the three, Body Work, PC Peter Grant gets a tip-off from his girlfriend, river goddess Beverley Brook, about a car that’s ended up in the Thames, complete with its driver. It comes with an indefinable something that sets Peter’s magically attuned nose twitching. DC Sahra Guleed of the Major Investigation Team and the irascible DI Mirian Stephanopoulos are dispatched to make further enquiries into what they call the latest Falcon case. For the uninitiated, as Peter explains: Falcon = weird bollocks = magic.

Peter and Guleed run up against a driverless haunted car or rather the car does its best to run up against them, several times, all with extreme prejudice. The scenes in the scrapyard with its bemused owner, Thomas Debden, are an absolute delight. He’s one of the seemingly ordinary folk who take extraordinary things in their stride – and this characterises the series and makes the characters so easily relatable.

Night Witch brings back Russian magic user Varvara Sidorovna Tamonia, who was born in 1921, served in an elite corps and whose name is reflected in the title. Varvara, looking no older than a woman in her 30s, is broken out of a prison van by masked ‘rescuers’, but she isn’t keen about being rescued, and isn’t inclined to do anyone any favours for something she didn’t ask for. But those responsible for the breakout want her help to track down their young son, who they believe has been abducted by something out of a Russian folktale and now living in a forest in the south of England.

Peter’s old colleague Lesley May – now working with the Faceless Man – makes an appearance, and Beverley gains an obedient troupe of Russian thugs. Then another kidnapping takes place and Molly the vampiric housekeeper breaks out her very sharpest kitchen knives and gets ready to ride to DI Thomas Nightingale’s rescue.

In Black Mould the Folly team are on the hunt for a psychotropic and distinctly psychotic sentient fungus spreading through some prime London properties, preying on the deepest fears of the residents. I enjoyed a cameo appearance by the scrapyard owner from Body Work, the delightful Thomas Debden, who’s a little disconcerted that Molly seems to be talking a shine to him.

I am constantly surprised by how much the writers and artists are able to pack into a graphic novel. Each one reads as a satisfying novella in their own right and for me they bring to life my own internal picture of the characters and the places Aaronovitch describes in the books. The outside of the Folly is perfectly depicted as one of the beautiful terraced houses in Bedford Place – and the temptation to go looking for that exact door when I next walk between Russell Square tube station and the British Museum will be hard to resist. Both Peter and Nightingale are so true to my mental images that it’s as if they’ve been drawn straight from my own head – if I had a single scrap of artistic talent, that is. Nightingale is immaculately drawn, urbane and laconic to the life.

The use of colouring in the books perfectly complements the text and the drawing, broodingly atmospheric and spooky when needed, and at other times as bright as a summer day in the capital.

If you like graphic novels and enjoy Aaronovitch’s captivating mix of magic and modern policing then the stories will richly enhance the books. If you tend to look askance at the attraction of ‘comics’, put any prejudice aside and enter a vibrant world of perfectly matched text and illustration that will bring to life the pictures in your head and add an extra layer to your enjoyment of a totally different side of London.

In other words, sit back and enjoy the weird shit, and be glad that Peter, Guleed and Nightingale are there to ride to the rescue. You might want to keep a large spray filled with fungicide on hand as well, just in case you start seeing mould on the walls …