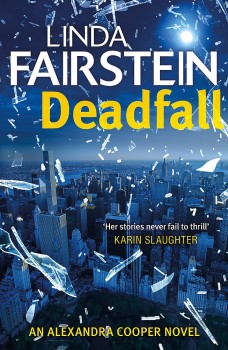 Assistant DA Alexandra Cooper is standing on the steps of the New York Metropolitan Museum of Art when her boss is shot dead and collapses on top of her.

In this, her 19th outing, New York assistant district attorney Alexandra Cooper, or ‘Coop’ to her friends, is leaving a fashion show organised to celebrate the life of Wolf Savage, whose murder occupied her in the last book of the series, Killer Look. Two well-aimed shots from a passing car kill her boss, Paul Battaglia, who for reasons unknown wanted an urgent word with his subordinate.

Coop is immediately plunged into a very hostile interrogation from a Brooklyn cop, Jaxon Stern, backed up by James Prescott of the FBI. Battaglia had many enemies from years of criminal prosecutions, but Stern and Prescott seem most interested in a recent investigation Battaglia was pursuing unaided. He had been visiting exclusive hunting lodges where the well-heeled can bag rare animals brought in for them to shoot.

But Coop is not confident that Stern and Prescott have her best interests at heart, and with her partner NY cop Mike, aided by friends Mercer (another cop) and Vickee, begins her own investigation. She visits Bronx Zoological Park and gets a rather sobering briefing on the worldwide trade in endangered animals and parts of the same, particularly to satisfy Asian demand for dubious medicines.

Another avenue of investigation involves a shady businessman, George Kwan, who Coop and Mike saw Battaglia visiting a few days before he died. They are clearly rattling a few cages when an attempt is made to fire-bomb their car, and Coop is consigned to a mental institution as a ruse to keep her out of sight. Being constitutionally resistant to restraint, however, she soon re-enters the fray.

Alexandra Cooper has a style all her own, a sophisticated New Yorker who has her own table in her favourite restaurants and a weekend place in Martha’s Vinyard. At the same time she’s the kind of tough broad that one used to see around Mike Hammer. As the book opens, despite her shock at the death of a close colleague, she plays hardass with her interrogators who attempt to use her disorientation to their advantage, and she manages to keep them at arm’s length.

As an ex-prosecutor for the city, Fairstein seems very much at home when depicting the Machiavellian politics of the DA’s office. The sections on the animal trade are no doubt a fair summation of this terrible blight on humanity. There is also a bit about Asian sweatshops, aimed primarily at China, although I think here she is a bit out of date – the worst excesses have moved on to places with less robust economies. There are plenty of topics for thought, however, all wrapped up in Fairstein’s typical fast-moving plot and exciting vernacular.