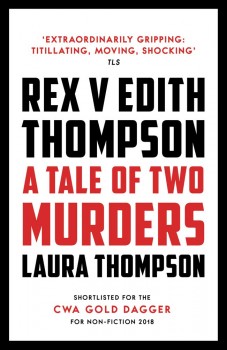 An exploration of the famous 1922 Ilford murder for which Edith Thompson and her lover Freddy Bywaters were hanged, along with the attitudes to women revealed in that judgement.

In late 1922, Percy Thompson was walking his wife home from an evening out when a man emerged from the shadows, wielding a knife. After a brief confrontation, Percy collapsed with several wounds, and died almost immediately thereafter. His wife Edith was as distraught as you might imagine, and so far as her utterances were coherent seemed to suggest that Percy’s death had occurred without the intervention of any third party.

Police perceptions of the case took a specific direction on receiving hints that Edith had formed a relationship with a younger man, Freddy Bywaters, and that Percy and Freddy had quarrelled about Edith. The prosecution’s case was eventually based upon this love triangle, and the contention that Edith and Freddy had conspired together to kill Percy to enable them to cement their relationship.

The evidence on which Edith was convicted was, however, almost entirely based on letters written by Edith herself to her lover, which Freddy was unwise enough to have retained. Edith was a prolific writer and her letters showed her to be a woman influenced a great deal by the romantic novels she read, and contained much that was untrue or wishful thinking – projections of her imagination.

The prosecution used a selection of her writings to impute to Edith a long-established intention to kill Percy. In her letters there were references to the use of poisons and ground glass, and even suggestions that these methods had been tried. An autopsy found no indication that there was truth in this, nor was there any evidence that Edith and Freddy had actually conspired to kill Percy in the manner that he met his death.

Nonetheless, the judge, the jury and the public at large were ready to cast Edith in the role of femme fatale – the older woman who had persuaded the young and attractive Bywaters to commit the crime. Her letters were a sensation, sections being widely reproduced in the newspapers for the delectation of readers.

The author explains the background of the persons involved very cogently and sets the crime in the circumstances of the time and place. She explains the growth in distaste for the death penalty, particularly for women, and why a wave of ‘prurient puritan hysteria’ carried Edith to the gallows when other women at the time escaped the ultimate penalty on far more justification.

The author brilliantly evokes a world significantly different from our own in many ways – while remaining very much the same in others – and the organisation of her material is really impressive. But the strongest impulse I carried from the book is the force of the emotion with which she rightly condemns the petty and self-righteous minds which so unfairly consigned a woman to be hanged, justifying the subtitle A Tale of Two Murders.