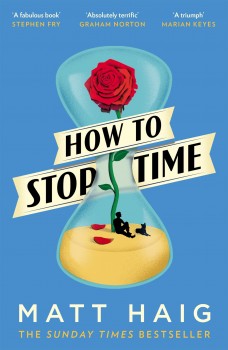 How To Stop Time

Tom Hazard may look like an ordinary 41-year-old, but he has lived for centuries. After frequently changing his identity to stay alive, he now craves an ordinary existence.

Matt Haig’s strange and compelling time-hopping story is aimed squarely at young adults, but is a well enough constructed and narrated tale to appeal to a readership of any age.

It’s based on the unlikely premise of a rare medical condition which prolongs life to ages described only in the Old Testament, and Haig explores the themes of love, loss, defeat and hope in a wild and bittersweet story about finding oneself, the certainty of change and about the age it can take to learn how to live.

Tom Hazard has a secret. He may look like an ordinary 40-year-old, but owing to this rare condition, he’s been alive for centuries. From the witch hunters of Tudor England, through meetings with Shakespeare, Tchaikovsky, Captain Cook and F Scott Fitzgerald, he has lived through history, moving on and changing identities every time his inability to physically age arouses suspicion. But he carries the memory of his one true love and is driven by a burning desire to find the daughter he was forced to abandon, who, he discovers, has inherited his apparent agelessness.

Now he thinks he has found the perfect cover as a history teacher at an East London comprehensive. In an area with a constantly shifting population, he hopes he can find some peace where people are less likely to notice his difference. Here he can call on his 400-plus years to teach his pupils about wars and discoveries – all the major and minor events which go to make up human history – as if he had never actually been a part of them. But in his attempt to tame a past fast catching up with him, he knows the only thing he must not do is fall in love.

Haig’s passion for history and the human condition make for an ambitious narrative, which suffers only slightly from the constant switching of centuries from various pasts to the present day – the only way the story could have made sense – and Hazard’s occasional lapses into a melancholy of reflection.

The construction of a secret society of others of his kind and the lengths to which they will go to prevent knowledge of their affliction becoming generally known is a little unnecessary, but offers a darker background to what is otherwise an entertaining romp through history melded with lessons about what is really important in life.

It is quite simple – and simply spelt out. We cannot control time, and special moments such as holidays, birthdays or retirement mean little. What Hazard and the reader will learn is that it is the little details that make life meaningful, and love, music, family and friendship all transcend time. Only fear stands in the way of this fulfilled life – fear of failure, disappointing others, or challenging the orthodox.

It is an ambitious piece of work, well researched in its historical sections, and worth the read as you may come to know more about yourself, whatever age you are!