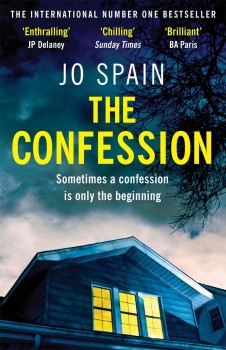 A man beats a disgraced banker to a pulp in front of his wife. He hands himself in, confesses the attack, but claims it was not premeditated and he didn’t know his victim. DS Alice Moody must discover whether this was a random act or linked to the banker’s shady past.

The talented Jo Spain’s first novel, With Our Blessing, was a carefully researched and scathing expose of the notorious Magdalene Laundries and mother and baby homes. The two which followed in the DI Tom Reynolds series also featured social and governmental problems from the country’s recent past.

Spain sticks to the same formula in The Confession. This time her chosen background to a twisted and dark psychological drama is the rise and fall of the so-called Celtic Tiger economy – that decade-long explosion of easy money, over-confidence and massive fiscal and political corruption which came close to crippling Ireland and whose affects are still being felt.

A man beats a disgraced but legally innocent banker to a pulp in his own luxury home and in front of his terrified wife, using one of the banker’s own golf clubs! Within hours he hands himself in to the Gardai, confesses the attack, but claims it was not premeditated. He also denies any previous knowledge of his victim, who now lies in a coma from which he may not recover.

The problem facing the oversize, overweight and moody Detective Sergeant Alice Moody – her nickname is classic bad police humour – is whether this was a random act or somehow linked to the banker’s shady past. When the perpetrator is revealed in the first few pages, the only question for both detective and reader is why?

It is a mark of Spain’s brilliance that she maintains this clever and absorbing story of lives falling apart in a welter of champagne, betrayal, obsession, weakness and domestic noir without once losing the reader’s interest right up to its shocking and totally unexpected climax.  She uses twin narrators – Julie McNamara, the victim’s beautiful, but essentially weak, wife and the attacker, J-P Carney, a product of a broken home and a childhood blighted by his father’s alcoholism – to spin this masterful, intense and compulsive tale.

Julie, a farm girl from rural Co Leitrim, is totally out of her depth in a world of designer clothes and jewellery, private jets, multi-billion Euro deals and OTT weddings in French abbeys, sustained only by her love for her charismatic husband.

Carney is everything she is not. His bi-polar mother deserted him and his failing father is sinking ever deeper into a self-pitying, drunken stupor. He flirts with drugs and crime as he struggles to be a good parent to his younger sister.

Spain’s characters, even those in quite minor supporting roles, are beautifully drawn with razor-sharp precision. As the story races along, they are backed by research which is both intensive and sensitive. But it is the banker Harry McNamara, despite his physical absence, who dominates the story, as he did all those around him. Driven by a compulsive addiction to risk, he is by turns brilliant, brutal, corrupt, generous, powerful, weak, greedy, loving and capable of the most blatant betrayal – Spain provides a forensically drawn example of the type of the financier responsible for the worldwide banking crash of 2007-8.

This gripping tale will have you wondering, along with the dour and determined DS Moody, whether Carney’s confession is driven by guilt or a calculated move in his own deadly game – and also questioning in what proportion the three major players, Harry, Julie or J-P, should bear the burden of guilt.