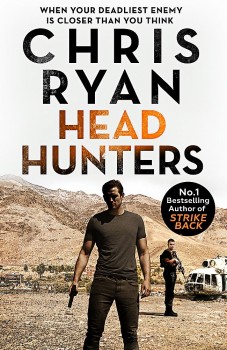 Danny Black has been sent to Afghanistan on a mission to hunt and kill the Taliban, but soon finds that he’s the one being hunted – for a war crime he didn’t commit.

The SAS are operating under the radar in Afghanistan. Their mission is to find – and kill – members of the Taliban. The high number of kills takes its toll on even the most hardened operative and when one of the team cracks, Danny Black is sent out as a replacement. The only problem – from Danny’s point of view – is that the team leader is Tony Wiseman, a man Danny thoroughly dislikes. But his superiors have told him to get on with the job, and that’s what Danny intends to do.

When the SAS kill team are parachuted close to an isolated village, Danny follows Wiseman’s orders, but the operation doesn’t go according to plan and Danny is shot. He wakes up in hospital and finds himself framed for a horrific crime against unarmed civilians, some of them children, that he knows he didn’t commit. Convincing others of his innocence isn’t easy, and Danny has no choice but to go on the run, determined to clear his name and put a stop to Wiseman’s lucrative extra-curricular activities.

Chris Ryan’s military thrillers are always good value. His own experiences in the SAS bring a level of authenticity that others struggle to match, but Head Hunters will certainly raise questions as to how far the army are prepared to authorise black ops in breach of standard rules of engagement and with planted evidence, leaving the big question hanging in the air of how far the ends justify the means.

Danny Black is a strong main character and one I’ve always liked. There’s not much to like about the other members of the kill team – apart from the dog, but it’s as well to bear in mind that animals and crime/thrillers are a bad mix. Tony Wiseman has got more unpleasant as the series had progressed, and it’s hard to imagine how anyone in Hereford thinks him suitable for anything, but then running an assassination squad does seem right up his street so maybe the decision-making wasn’t that far off the mark.

Ryan’s writing is sharp and to the point. He doesn’t overuse detail and what he does include is always pertinent and to the point, with no thinly-disguised info dumps introduced to show off the depth of the author’s research. The plot proceeds at a fast pace, driven by short chapters and no-nonsense prose. The general morality – even Danny’s – is wholly questionable and provides an added dimension to a taut action thriller that never pulls its punches.