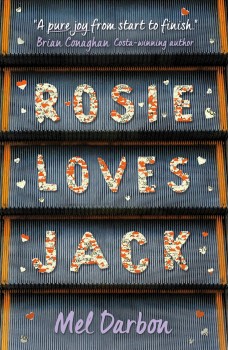 Rosie loves Jack, but her father wants to keep them apart, especially when Jack is sent away to a special home in Brighton. But Rosie isn’t prepared to give up on her boyfriend, even when he stops contacting her.

Sixteen-year-old Rosie Tremayne loves Jack, but Rosie’s dad doesn’t want them to be together. He’s worried that Jack will hurt his precious daughter, because physical trauma as a baby has left Jack with a problem controlling his emotions. When Jack gets angry, he can lash out, but Rosie knows Jack will never hurt her. The problem she has is getting her parents to understand that.

When Jack gets wound up at college and smashes a computer, he’s sent away to residential care in Brighton, Rosie is distraught at losing the boyfriend she loves and even more distraught when Jack doesn’t reply to her texts. Her parents think that with time Rosie will forget about Jack, but Rosie has no intention of doing that.

When she discovers that her father has been intercepting the postcards Jack has sent to her, she’s angry and upset, and determined to go to Brighton and find him. Rosie loves Jack, and that means she’ll do anything she can to see him again, even if it means crossing London and the south east in a blizzard.

Mel Darbon’s story of Down’s syndrome teenager Rosie is heart-warming and, at times, chilling, and the chills don’t just come from the snowstorm that’s brought London to a standstill, stopping trains moving, and filling hostels and hotels with stranded travellers. Seen through Rosie’s eyes as she narrates her own story, the world is a complex place. Not everyone can be trusted, but lack of trust isn’t something that comes naturally to Rosie and she copes well with the sometimes unthinking cruelty of others. Rosie is bright, funny and determined to live as independently as she can, constantly coping with people who ask where her carer is, politely pointing out that she is quite capable of managing on her own, which she is – most of the time.

In her journey across London, Rosie falls in with Janek, who promises to help her, but Rosie soon learns that in Janek’s house promises aren’t kept. The other two girls in the house, Lisette and Courtney, aren’t happy to have Rosie foisted on them, but 15-year-old Lisette does her best to help Rosie. The look inside the cruel world of underage girls forced into sex with older men is dark and upsetting, and more effective by far than many similar portrayals I’ve seen in adult crime fiction. Rosie’s love of purple is stripped from her when she’s forced into a babydoll dress of that colour and expected to perform for Janek’s customers.

After escaping from Janek, Rosie finds it hard to trust anyone, but homeless Tom, who lives under a bridge with his dog, is very different to Janek and with his help, Rosie embarks on the final leg of her journey, amidst a frantic police search for her.

Darbon’s portrayal of Rosie and Jack is bright with emotional connection. The language comes over as authentic, and took me on Rosie’s journey inside her head, not as an onlooker, but someone looking at the world from the inside out. Rosie’s emotions are as vibrant as her storytelling, and her emotional honesty shines through on every page. It’s impossible to be in any doubt about her love for Jack, and I was desperate for them to get the happy ending they so richly deserved. The book is a triumph of how to write for teens from the point of view of a teenager. I was left with the overwhelming view that what makes Rosie stand out is not her differences, but all the ways in which she is the same as everyone else.