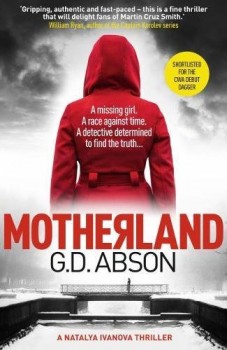 Captain Natalya Ivanova of the St Petersburg police makes preliminary enquiries when a Swedish girl goes missing, but the case has many complications.

This is the first book in a promised series about Captain Natalya Ivanova of the Criminal Investigations Directorate, who turns out to be an excellent investigator as well as a woman of robust moral principles with strong feelings about the tide of corruption in contemporary Russia.

A missing student would not normally merit the time of CID, but Zena Dahl is the daughter of a Swedish billionaire and Ivanova is asked to check at the girl’s flat when she is reported missing by a friend, Yulia. Enquiries have not progressed very far when Ivanova is called back to the office to be introduced to a new senior officer in the CID, Major Dostoynov. Dostoynov is ex-FSB (the federal security service), and it soon appears that the FSB have a particular interest in the case.

Details start to accumulate which show that Zena’s disappearance is something serious, sufficient to keep Ivanova on the case. Zena was orphaned as a child and taken to Sweden by Thorston Dahl, an industrialist. Zena seems to have been making investigations into her parentage, but both Yulia and Dahl’s lawyer in St Petersburg, Lagunov, are less than forthcoming. Then Yulia goes missing, apparently on the run.

Ivanova’s efforts to uncover the truth are in danger of being closed down at any time. Dahl’s interests in Russia are in play, and the FSB’s primary concern is to ensure they benefit, with little interest in justice or finding the missing women. Ivanova suspects her subordinate Rogov of reporting back to Dostoynov so has to be careful about what information she releases. But at the same time her actions are at all times under scrutiny and she cannot afford any slips in correct procedures.

She is under pressure at home as well. Her husband Mikhail needs to make a bribe to ensure that his son Anton gets into college and avoid military service. When Natalya checks on the computer to establish whether he has done so she finds out that he has funds overseas, probably the gleanings from corruption – Mikhail is also police. She loves her husband but will find it hard to live with someone who takes bribes.

This is a great story – the protagonist is full of bravery, resource and intelligence, and needs to be to avoid being bulldozed aside by the corrupt and misogynist society around her. She despises the crude methods of her colleagues and has sympathy for the weak, including her stepson Anton. The chase is gripping and brought to a thrilling close.

The story also conveys the essence of modern Russia: the relentless wall of anti-West propaganda used to distract locals from the mess and inefficiency at home. Ivanova muses on the existence of an app to calculate appropriate fines for traffic violations, and the extent to which people hold contradictory positions at the same time: “News studios pretended propaganda was the truth. Elections pretended to be fair. Everyone pretended to be someone else, and nobody knew who they were any more.”